Book Review: The Resurrection of Aubrey Miller by LB Simmons

The Resurrection of Aubrey Miller 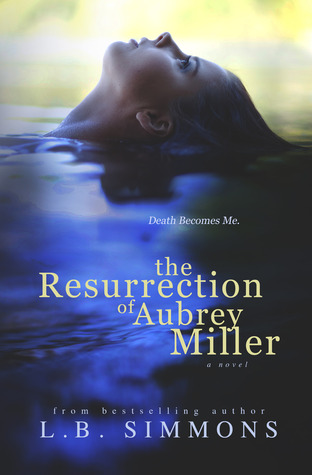 Summary: Death.
For some, it's simply one of life's certainties, nothing more. For others, it's merely a fleeting thought, one often overshadowed by the reckless delusion that they have been blessed with the gift of immortality.For Aubrey Miller, death is the definition of her very existence. Overcome with the guilt resulting from the loss of her beloved family, she alters her appearance from the once beautiful, blonde-haired, blue-eyed little girl to that of one shrouded in complete darkness, enveloping herself in her own unbreakable fortress of solitude as a form of protection for others.As she enters her first year of college, her goal is simple: Earn a degree with the least amount of social interaction as possible. What she never anticipates is the formation of very unlikely relationships with two people who will change her life in ways she never believed possible: Quinn Matthews, the boisterous former pageant queen, and Kaeleb McMadden, a childhood friend from her past who never really let her go.Over the years, as their connections intertwine and grow, a seemingly indestructible bond is formed between the three...But when death painfully reemerges, Aubrey is lost once again, burying herself deeper than ever before inside the familiar fortification of her fears.Will the refuge of friendship, the solidarity of life-long bonds, and the power of unconditional love be enough to do the impossible?Will they be enough to finally bring about...The Resurrection of Aubrey Miller?


Review: One of my friends recommended this book to me about a month ago, so I added it to my to-read list and left it at that. To my surprise, I was offered the chance to review this book about a week later and didn't even hesitate to accept. I was excited to see if this one really was as emotional and amazing as I had been hearing…
Aubrey Miller has spent her whole life causing death. It seems like anyone and everyone she gets close to dies. Her solution? Closing herself off from everyone so that she can never hurt them. Aubrey takes on the identity of Raven, a gothic, pierced, cat-eyed girl who doesn't give a darn about anyone around her. But throughout her first year of college, Aubrey finds herself forming some unlikely friendships with her boisterous college roommate Quinn and Kaeleb, a friend from the past she's tried so hard to run away from. Aubrey finds herself opening up to the real Aubrey, but when death starts taunting her again, Aubrey thinks the only way to save herself and the ones she loves is to bury herself even deeper than before. This time, though, she may not be able to get back out. Wow. I was warned that this book would be emotional. But, boy, this book was EMOTIONAL. First, I have to say that I thought LB Simmons did an amazing job pacing this book out. Normally I hate books that take place over multiple years, but she created Aubrey's life in a way that made sense and really showed her growth over her four years of college. The months that were passed over within a couple of pages were sometimes the most powerful, especially those parts when Aubrey became Raven again. JEEZ. I didn't cry in this one (I rarely cry in books), but I was definitely feeling emotionally attached to Aubrey as if she really was one of my friends. My heart ached for her when she made some bad decisions and when she revealed to us and her best friends what had happened in her past that was so hard for her to deal with. The revelations of her past were very well done and not at all overwhelming like they could have been. One tragedy was dealt with at a time, which made the reader feel that much more connected to Aubrey as she slowly dealt with the pain of her past. Back in the present, though, involves two of the best characters ever. Quinn and Kaeleb. Secondary characters are so important in a story and I loved how Aubrey had two such unique, supporting, and troubled friends. Quinn and Kaeleb had their own issues, but they were also there to help Aubrey try to heal from her past. Mmmmm, did I mention Kaeleb? Because he is so freaking sweet and adorable and just... *sigh*. I really really loved Kaeleb. I loved how he started off slow and didn't even try to make a move on Aubrey until he was absolutely positive she trusted him, which really did take awhile. Then, when they finally got together, it was just so adorable and I loved how Aubrey felt and acted around him. Even when things started slipping downhill for Aubrey again, he was just…yeah. Amazing. The Resurrection of Aubrey Miller is definitely an emotional ride that slowly creeps up on your heart and, once it latches on, will never let go. All of the characters are amazing and create a story that is so emotional and heartbreaking that it's impossible not to love. I definitely would say that fans of Colleen Hoover would love this book. If you haven't yet, you have to pick up The Resurrection of Aubrey Miller. Just be prepared for some serious feels and a story you won't forget anytime soon.

Posted by Jessica (Peace Love Books) at 7:41 AM