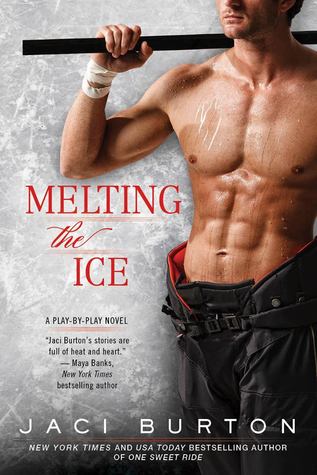 Summary: Carolina Preston has only one goal in mind—launching her new fashion line. She needs only one last thing to make it perfect—hockey phenom Drew Hogan. But Carolina and Drew have a history that goes back to their college days, and Carolina doesn’t want the embarrassment of her past to cloud the brightness of her future.
Drew is eager for the chance to show Carolina he isn’t the boy who hurt her back then, but a man now, with the skills necessary to melt the icy exterior of her cold heart.


Review: Oh man. This book. So. Good. I mean, one look at this cover and I knew that I was going to love every second of it. But my expectations didn't even come close to how much I ended up loving this one!
Carolina Preston is living her dream- launching her own fashion line. Working day and night, Carolina can't let anything get in the way of making her line a success. But when her brother recruits his best friend, hockey hotshot Drew Hogan, to be one of her male models, Carolina is anything but excited. She and Drew have a past that includes one steamy night in college where Carolina wakes up the next morning alone with a broken heart. Now that they're adults, though, Carolina hopes she can keep their relationship strictly professional. But Drew's determined to show Carolina he's not the same playboy he was back then. Can Carolina learn to forgive Drew without letting her dedication to her work take over her life? Where to start? As far as heroines go, I loved Carolina's character. She is a dedicated, driven women who wasn't about to let Drew back into her life that easily. But she still showed her southern charm by never being flat out rude to Drew. Carolina is just a super sweet girl who was really hurt by a guy she idolized in college, and has to work VERY closely with him in order to reach the success she's dreamed of her entire life. But, oh boy, does Drew redeem himself. I love how he's incorporated into Carolina's fashion line and is such an inspiration to her men's line. The way the author describes how he moves both on and off the ice, though, sounds pretty inspirational to me as well! Drew may be a hotshot hockey player, but he's so gosh darn sweet and has really changed from the player he was in college. What else this there to say? Jaci Burton is at it again with another irresistible sports romance that is impossible to put down. The characters are lovable, even the secondary characters, and the story is utterly sweet with its steamy moments thrown in at just the right moments. If you want a story with a hot, athletic hero and a determined, charming heroine, you have to pick up Melting the Ice as soon as possible. You're missing out on a fantastic story written by the queen of sport romances!