Book Review: Flowers in the Attic by VC Andrews 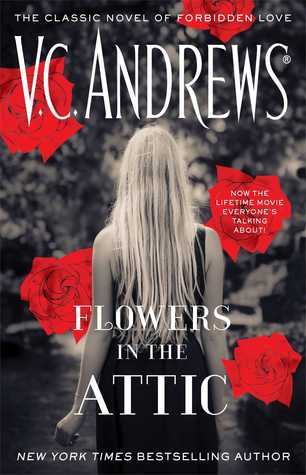 Summary: The four Dollanganger children had such perfect lives -- a beautiful mother, a doting father, a lovely home. Then Daddy was killed in a car accident, and Momma could no longer support the family. So she began writing letters to her parents, her millionaire parents, whom the children had never heard of before.

Momma tells the children all about their rich grandparents, and how Chris and Cathy and the twins will live like princes and princesses in their grandparents' fancy mansion. The children are only too delighted by the prospect. But there are a few things that Momma hasn't told them.
She hasn't told them that their grandmother considers them "devil's spawn" who should never have been born. She hasn't told them that she has to hide them from their grandfather if she wants to inherit his fortune. She hasn't told them that they are to be locked away in an abandoned wing of the house with only the dark, airless attic to play in. But, Momma promises, it's only for a few days....
Then the days stretch into months, and the months into years. Desperately isolated, terrified of their grandmother, and increasingly convinced that their mother no longer cares about them, Chris and Cathy become all things to the twins and to each other. They cling to their love as their only hope, their only strength -- a love that is almost stronger than death.
Review: Going into this one, I expected a phenomenally creepy story that pulled me in until the end. Sadly, I found this one to have an interesting story, but it was far too slow and just seemed to drag by.
The Dollanganger children have grown up with two loving parents and anything they could ever ask for. But when their father dies and their mother is left in debt and helpless, she takes her four children back home with her. Home, though, involves begging her strict mother and father to take her back after she ran away so many years ago. In order to gain forgiveness from her father, she must hide away her children and never let her father know they exist. Waiting for their grandfather to die in order to inherit his money and live happily ever after, the four children begin their lives in the attic. Wow, I didn't think this book would end. It wasn't a horrible book, it was just so drawn out. I guess it has to be when the kids are locked up in an attic for years. How interesting could things get? The story didn't really pick up until the last 50 pages, so you have to get through a slow 350 pages to get to the real intense, creepy plot everyone raves about. I honestly don't really know what else to say. Maybe for its time, this one was a fantastic read (it came out in 1979), but I didn't find myself wowed by the story. Cathy and Chris got annoying at times by how naive they would act, but I guess that was the purpose seeing as they basically grew up in an attic, cut off from the rest of the world. Overall, this book was okay. I went in expecting a lot and instead got a slow story that didn't pull me in until the very end of the novel. I'm very interested, though, in the Lifetime movie based on this book that is coming out late this month. Maybe I'll check it out to see how they made this book come alive on screen.