Book Review: It's Kind of a Funny Story by Ned Vizzini 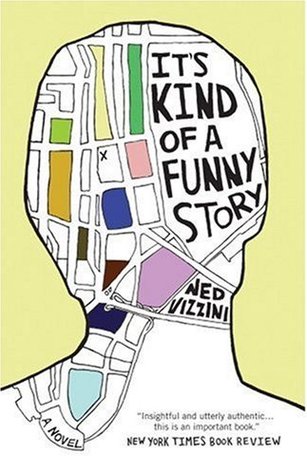 Summary: Like many ambitious New York City teenagers, Craig Gilner sees entry into Manhattan's Executive Pre-Professional High School as the ticket to his future. Determined to succeed at life -- getting into the right high school to get into the right college to get the right job -- Craig studies night and day to ace the entrance exam, and does. That's when things start to get crazy.

At his new school, Craig realizes that he's just average, and maybe not even that. He soon sees his once-perfect future crumbling away. The stress becomes unbearable and Craig stops eating and sleeping -- until, one night, he nearly kills himself.
Craig's suicidal episode gets him checked into a mental hospital, where his new neighbors include a transsexual sex addict, a girl who has scarred her own face with scissors, and the self-elected President Armelio. There, isolated from the crushing pressures of school and friends, Craig is finally able to confront the sources of his anxiety.
Ned Vizzini, who himself spent time in a psychiatric hospital, has created a moving tale about depression, that's definitely a funny story.
Review: I've been meaning to read this book for so long. This is probably the third time I've gotten from the library in the past year, and I finally made time to read it! All I can say is that I'm glad I had the chance to read this one and see why everyone loved it so much.
Craig Gilner is determined to have a successful life. After studying for over a year to pass the entrance exam for the most prestigious high school in New York, Craig starts to realize he can't be perfect, that he's just average. And that scares him. Craig stops eating or sleeping, and his depression starts to eat away at him. Why should he even bother living? One night, at his lowest point, Craig calls the suicide hotline and finds himself checked in to a mental hospital where he realizes he's not the only one who feels life closing in on him. With new friends and no pressure from the outside world, Craig rethinks his entire life and how he can live with himself just the way he is. This book was just so….real. There are few authors who can write a truly real story about teens with real emotions, and Ned Vizzini sure did that. Kind of like John Green's books, this one explored the hard truth about life and how it's not always bearable for some people. Craig has some serious anxiety issues and just doesn't know how to cope with not being perfect. And you get to experience Craig's anxiety right along with him, and understand exactly why he feels the way he does. What made this book so great, though, was when Craig was in the hospital and we got to meet all of the other patients. Craig seems completely normal compared to the people in the hospital, and it just goes to show who everyone has their problems. Then, Craig really made a difference in the lives of the other patients, just like they made a difference in his life. It was really intriguing to see how much other people can affect others, no matter how crazy they may seem. Overall, this was a fantastic read that goes so much further than a lot of YA books do. It makes me so sad that Ned Vizzini committed suicide last month, because he was such a talented writer. I hope people can continue to enjoy his novels and add this one to their must-read lists.