Book Review: Up in Smoke by T.M. Frazier 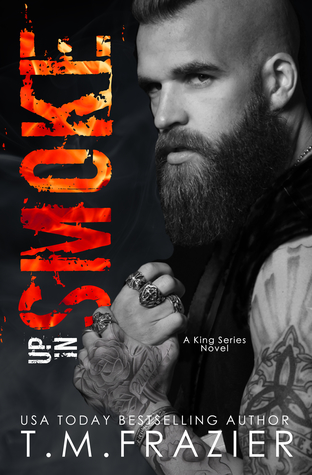 I’m a man without a conscience. I deal in murder and mayhem.I’m the best at what I do. Frankie Helburn is supposed to be an easy job. A means to flush her father out of hiding.Simple. Except there isn’t anything simple about Frankie or the secrets she’s keeping. She’s stubborn as hell and the sexiest god damn thing I have ever seen, sending dark, dirty animalistic desire coursing through my veins. She’s cocaine with legs. A f*cking addiction that makes me question things I’ve never questioned before. Want things I’ve never wanted before. I might have her, but she isn’t mine to keep. If her father doesn’t show his face, she will be mine. To KILL.

Ever since I read and devoured King over the summer, I have been obsessed with T.M. Frazier's ability to write a dark romance. While I've only read the first three books of this series, I was excited to read Smoke's story and see another bad boy fall in love!Smoke is out for revenge. His world was taken away from him and he's determined to bring the man who took it all away down. And that begins with taking his daughter. Except she's definitely not what Smoke expected. Stubborn and with a will made of steel, Frankie Helburn has been taking care of herself for a long time and puts up a fight when she finds herself taken by a dangerous, brooding man. Smoke is shocked by the attraction he feels of Frankie, but he needs to remind himself of why he's taken her and needs to break her before she breaks him. Wow, going into this one I was so intrigued by both Smoke and Frankie. They both had so many secrets and I couldn't wait to discover why each of them were living the way they were. From the moment we met Frankie, it was clear she was such a strong woman who was used to taking care of herself. When Smoke kidnapped her, she felt scared, but she was determined to push Smoke's buttons and find a way to survive. I loved her fight and how hard to pushed herself when it came to surviving. The romance in this was HOT and it was fun watching Smoke try to fight the rising attraction he had for Frankie the longer he spent time with her. He was such an angry, dangerous man and it was fun watching his tough guy act be threatened. I honestly could not put this book down because I wanted those two to get together so badly. I know that Smoke was hurting and angry, but he really needed an outlet for all of those pent up emotions. And I really loved getting to know his background and see him realize how many people he had in his life who actually had his back. Like I said, I have only read three books in this series, but it was so fun seeing some of my favorite characters make an appearance in this book. While some things were a little spoiled for the books I skipped over, I still loved seeing the characters all work together and interact with Smoke and Frankie. I am so intrigued by Rage's character now and definitely have to pick up her story! For an intense, action-packed, and steamy romance, you have to pick up Up in Smoke!