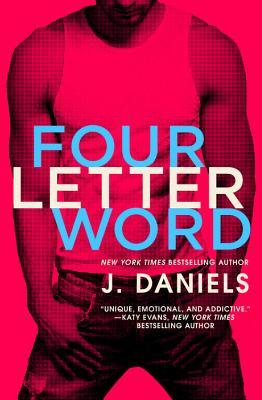 Which four letter word will change their lives forever?Sydney Paige was never so mortified to hear the words "wrong number" in her life. She meant to tell off the guy who broke her best friend's heart but unleashed her anger on a perfect stranger instead. And now her world is turned upside down by the captivating man who wants to keep her on the line.Brian Savage is living a life he's quickly come to hate-until Sydney's wild rant has him hooked and hungry for more. Soon the sexy woman on the phone becomes the lover in his bed. But Brian has secrets, and the closer he lets Syd get, the harder it is to shield her from the devastating mistakes of his past . . .

These past few months I have been gobbling up books by J Daniels. I have heard so many amazing things about this series and, since it's been sitting on my shelf for a year, it was about time I picked it up! When Sydney Paige dials up the man who broke her best friend's heart, she unleashes all of the pent up anger she feels over men and what had recently happened to her in the love department. Once she let's it all out, though, she's mortified when she realizes she dialed the wrong number. Brian Savage is intrigued by the feisty girl who misdialed and called him, so he finds himself texting her and can't stop thinking about her. But Brian has mistakes in his past that he can never make up for, so he knows he could never be the man for Sydney. But Sydney begins to have feelings for the stranger on the phone and isn't sure if she can work up the nerve to make it into something more…Going into this one, I was so in love with the beginning of the story. It was fun watching Sydney and Brian flirt over the phone and fall for each other without even meeting one another. Brian had such a heart wrenching background and it was so sad learning more and more about his story as the book went on. I also really enjoyed Sydney's story and her adjusting to her new life and her new job as a waitress. The whole crew at the restaurant was fun and I fell in love with them. When we got to the second half of this book, though, it seemed like the story slowed down and it was hard for me to get as into it as I was in the beginning. Also, the way Brian talked and dropped his pronouns started to really annoy me and I couldn't enjoy him as much as a character because I imagined him talking and it sounded so weird to me. My love for this story fizzled and I just didn't love it as much anymore. Overall, this one had a strong beginning that I could not get enough of, but didn't hold my interest. I will say, though, that I fell in love with all of the characters in this novel and am dying for stories from the rest of them!