Blog Tour + Review: Next Year in Havana by Chanel Cleeton 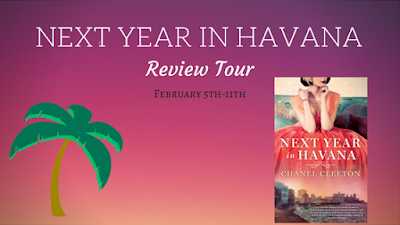 Next Year in Havana

After the death of her beloved grandmother, a Cuban-American woman travels to Havana, where she discovers the roots of her identity--and unearths a family secret hidden since the revolution...Havana, 1958. The daughter of a sugar baron, nineteen-year-old Elisa Perez is part of Cuba's high society, where she is largely sheltered from the country's growing political unrest--until she embarks on a clandestine affair with a passionate revolutionary...Miami, 2017. Freelance writer Marisol Ferrera grew up hearing romantic stories of Cuba from her late grandmother Elisa, who was forced to flee with her family during the revolution. Elisa's last wish was for Marisol to scatter her ashes in the country of her birth. Arriving in Havana, Marisol comes face-to-face with the contrast of Cuba's tropical, timeless beauty and its perilous political climate. When more family history comes to light and Marisol finds herself attracted to a man with secrets of his own, she'll need the lessons of her grandmother's past to help her understand the true meaning of courage.

I am a huge fan of Chanel Cleeton, but I don't read that many historical fiction novels. I was intrigued by the dual narrative of this book, though, so I decided to pick it up and give it a try. In Havana 1958, Elisa Perez is a 19-year-old who is part of the high society and has never had to worry about a thing. When she falls in love with a revolutionary and the country is falling apart, Elisa's eyes are opened to the dangerous world she's living in. In 2017, Marisol Ferrerar finds herself going to Cuba to spread her grandmother's ashes and uncovers a life she had no idea her grandmother had lived while trying to grasp onto the Cuban roots she has spent her whole life trying to understand. While this book is historical fiction, it was so action packed and fast paced. I think that because it was a dual narrative between 1958 and 2017, I never got bored with one story because I was so caught up in both. I didn't want to leave Elisa's past, but I also wanted to know what was going on with Marisol in the present. I loved how everything lined up so perfectly with what Elisa was going through and what Marisol was uncovering. I've got to say, I don't really know a lot about Cuban history, so it was fascinating seeing Cuba in the 50s and in the 2010s. I could feel the heartbreak and fear in these characters while they were trying to hang on to those they loved. As a romance junkie, I loved the romance in both Elisa's and Marisol's lives and how hard they fell for the men who were part of the dangerous political climate of Havana.Overall, I absolutely loved this book. There was so much history woven between the two story lines and I could not put the book down. I loved both Marisol and Elisa and only wanted the best for them. For an intense, emotional novel that takes a hard look at Cuban life, you have to pick up Next Year in Havana!