Book Review: Return to Us by Christy Pastore

Return to Us (The Harbour Series #3) 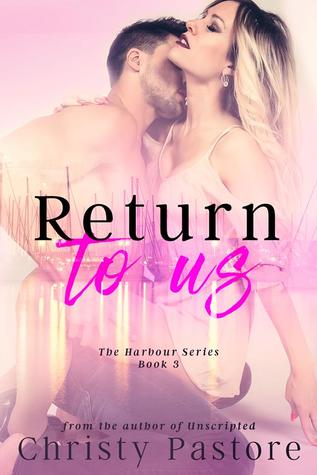 I married the man of every woman’s dreams. My husband is the leading man in their filthy fantasies. I know because they’ve told me.Matthew Barber is Tinsel Town’s most sought-after movie star and I’m the girl next door. Tinley Atkinson, the former child star with an Ivy League education, and the daughter of a deceased Broadway legend.Three short years later, it’s all crashing down.We were the quintessential celebrity couple—Mattley, Hollywood’s Heartthrob and America’s Sweetheart.We fell in love, and the whole world watched as our fairytale romance unfolded between the pages of glossy magazines spreads and candid moments splashed online.The public is fascinated with the rumors swirling around us—I’m the jilted wife and he’s the no-good cheater. I’m infertile and years of drug abuse is to blame. He wants kids and I would rather have a career.He’s the love of my life.What am I going to do about that? Marriage is tough and it’s even tougher in Hollywood, I’m ready to fight . . .For me.For him.For us.

I love a good movie star romance and I was intrigued that this one was actually about a couple that was already married trying to save their relationship. As my first book by Christy Pastore, I was super excited to read it! Tinley and Matthew meet and are instantly enamored with one another. Tinley can't believe she's with the man of her dreams and Matthew can't stop thinking about Tinley. With both of their schedules, though, it's hard to start a serious relationship. But they get married and really think they can make it work. Until life and conflicting jobs get in the way. Now, Tinley and Matthew are fighting to keep their marriage together while fighting the ugly rumors and gossip that comes with living in the spotlight. I was so excited to start this book, but I think that the organization of the timeline of this novel really threw me off. We started off with Matthew and Tinley meeting for the first time and trying to start a relationship even tough they were both so busy with their own careers. Then, we skipped straight to their marriage troubles. I feel like we didn't really ever get to see these two as a couple or understand the breakdown in their marriage. We were only told snippets of how their marriage fell apart, but we didn't get to feel it as the reader. And the whole part where Matthew admitted he wanted to cheat on Tinley was just confusing to me. It was like they commended him for admitting it and he was never admonished for wanting to be unfaithful to his wife.Also, I'm not sure if it's because this is book three in the series and I haven't read the other two, but I was really confused about some of the other characters and their storylines. At one point, someone is kidnapped by they don't really spend any time explaining that. It happened, and then they mentioned it again in the future of how it affected Tinley. I just didn't get enough information and didn't feel like I connected to these characters. Overall, the format that this book was told was very hard for me to get into. I couldn't connect with these character's relationships or really grasp their marriage since we didn't really get to see them happily married or where it all broke apart. Some conversations didn't completely make sense to me and I just felt like something was missing as I was reading this one. I definitely want to pick up the first few books in this series to see if gaps are filled in, but I just couldn't fall in love with this story.