In Pieces (Something More #2) 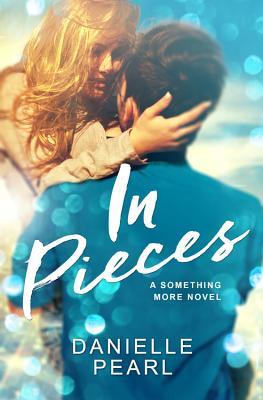 Three years ago she was left in pieces . . .

Most college freshmen love the newfound freedom of living on campus, but none of them craves it like Beth Caplan. One ill-fated night when she was fifteen left her locked in a posh prison of private tutors. It's for the best, everyone said, and maybe it was. But after years of hard work and healing, the one person who never thought of her as broken could be the one to break her all over again. And Beth can't seem to stay away now any more than she could all those years ago.

As soon as David March learned his best friend's little sister was enrolling at his school, he promised to look after her, and promised himself he'd keep a safe distance. But the sweet little girl he'd grown up with has transformed into a gorgeous young woman, and she's attracting attention from people she shouldn't-like the ex who nearly destroyed her and a strange new student with a disturbing habit of showing up wherever Beth goes. But for David, the most troubling discovery is realizing that he doesn't just want Beth to be safe. He wants her to be his.

When I had the chance to review this book, I didn't hesitate to take it. I have heard so many good things about Danielle Pearl, so I was excited to see what she could bring in this college romance!After feeling utterly broken three years ago, Beth's family has treated her like a fragile doll who could collapse at any moment. Now, Beth's in college and finally able to live on her own. Enjoying the freedom, Beth isn't too happy when her brother's best friend, David, decides to be her own personal bodyguard on campus. David has always had feelings for Beth, but he knows he can never have her. When he hears that she's going to his college, he knows he has to protect her at all costs. Can he protect her, though, without revealing or finally giving in to how he really feels about her? Going into this one, I knew that it was going to be emotional, but I didn't know it was going to be as emotional as it turned out. I had thought something else had happened to Beth in the past, so when we learned about what had happened three years ago right off the bat, I was definitely surprised. Beth was so broken in the past, so I understood why people treated her in such a fragile way. Seeing that Beth and the Beth now, though, I could also understand why Beth wanted to just be treated normally now that she was finally in college. Beth had such a good heart and I loved how much she wanted to help people after what she had gone through. Moving on to the romance, this was definitely a forbidden romance with a lot of angst, specifically on David's part. Since we got both POVs, David was so angsty when talking about how much he wanted Beth but knew he couldn't have her because of being best friends with her brother. Instead, he tried to protect her and, in the process, warned every single other guy off of her. I kind of wish we had some more depth to David's character, especially with his writing. We got a little glimpse of that and how important it was to him, but he spent almost all of his time thinking about Beth and his feelings and how to protect her. In the end, I really enjoyed my first book from Danielle Pearl. There was emotion, heartache, and a beautiful romance. While it did get a little too angsty at times to the point where I wish more went on between their talk of longing and emotion, I still really enjoyed these characters and their story. And there were even a few surprises thrown in at the end that I wasn't expecting at all. I definitely can't wait to read more from Danielle Pearl!