Book Review: Where I Belong by J Daniels

Where I Belong (Alabama Summer #1) 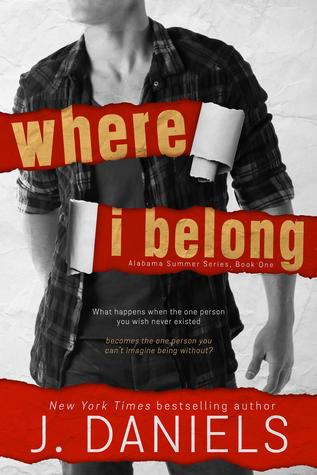 When Mia Corelli returns to Alabama for a summer of fun with her childhood best friend, Tessa, there's only one thing keeping her on edge. One person that she’d do anything to avoid.

Mia hates him with a fury and has no desire to ever see him again. When she decides to start her summer off with a bang and finally give away her v-card, she unknowingly hands it over to the one guy that excelled at making her life miserable, learning a valuable lesson in the process.

Always get the name of the guy you’re going home with.

Ben can’t get the girl he spent one night with out of his head. When she leaves him the next morning, he thinks he’ll never see her again. Until he sees her lounging by the pool with his sister.

Mia is determined to hate Ben, even though she can’t forget him.

Ben is determined to prove he’s not the same guy he used to be.

WHY HAVE I WAITED SO LONG TO READ J DANIELS? So many people have told me to read anything by J, yet I never did until I had some free time and was looking for an ebook to read on my kindle. I had one-clicked this book when it was on sale and all I can say is that I'm so happy I FINALLY gave this one a chance! There is no one Mia hates more than Ben Kelly. As her best friend's brother, all Ben did was torment and make fun of Mia growing up. Now, Mia is returning to Alabama to spend the summer with her childhood best friend and is determined to ignore Ben, no matter how many years have passed between them. Little does Mia know, the hot guy she meets at the bar and goes home with on her first night back in Alabama is none other than Ben Kelly. Ben never expected to fall for the Mia he liked to pick on as a kid, but she's a completely different person and he's determined to show her how different he's become too. Oh my gosh, from the beginning I was a totally goner for Ben. When we learned about what he did as a job and more background information about his life (trying to not spoil anything here!), I was literally swooning over him. I loved so much, though, how Mia was definitely not making it easy for him, no matter how attracted to him she was now. It was so funny how they reconnected and how Mia was definitely not ready to forgive him for the mean things he did when they were kids. There is another character in this book that I was OBSESSED with, but I can't say who that person is without spoiling something major. All I can say is that he was so gosh darn cute and I loved him. Other characters I loved were definitely Ben's sister and his coworker. I really enjoyed their little side-drama romance and definitely want to know more of their story. I wish we had gotten more of Tessa, though, since Mia had gone to Alabama to spend the summer with her. But I do understand how Mia and Ben had a growing relationship that had to take up the focus of the story. Overall, I am so happy that I've finally read something by J Daniels. I am so excited to pick up her other books and fall even more in love with her writing and her characters!