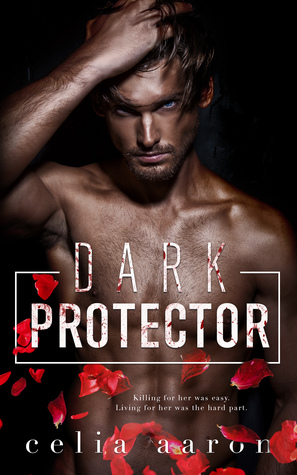 From the moment I saw her through the window of her flower shop, something other than darkness took root inside me. Charlie shone like a beacon in a world that had long since lost any light. But she was never meant for me, a man that killed without remorse and collected bounties drenched in blood.
I thought staying away would keep her safe, would shield her from me. I was wrong. Danger followed in my wake like death at a slaughter house. I protected her from the threats that circled like black buzzards, kept her safe with kill after kill.
But everything comes with a price, especially second chances for a man like me.
Killing for her was easy. It was living for her that turned out to be the hard part.

To be honest, I had never heard of Celia Aaron until I met her at a book signing. Her covers definitely caught my eye and I couldn't resist buying three of her dark romances. I couldn't wait to read them!Conrad is a bad guy with a dark past. As a hired assassin, all Conrad knows is death. That's why when he first lays eyes on Charlie, he is enamored with her light. He can't help but watch her, but he makes sure he never gets too close. Until some guys after him puts Charlie in danger. Conrad would give his life to protect Charlie and while he knows he would bring nothing but death and destruction, once his life infiltrates Charlie's, he knows there's no going back. Right from the start, this book was packed with action. I haven't had the best of luck with assassin books, but I loved how often Charlie and Conrad were on the run and fighting the bad guys. There were real, realistic threats and I really appreciated how our main characters actually did get hurt and not everything was a walk in the park for them. I also loved how Conrad had a right hand man there to help him out of trouble when he needed it. Nate added some much needed comedic relief when he pushed Conrad's buttons and I would love for him to have his own book! As for Charlie's character, I loved how full of surprises she was. I liked getting to know her more as she spent more time with Conrad and opened up to him. I do think that since we entered this book after Conrad found an obsession with watching Charlie, their relationship progressed a bit too quickly for my taste, especially on Conrad's part. But other than that, I enjoyed watching them learn to trust each other and fight for their lives. Fans of the Jason Bourne movies are going to absolutely love this book. With a brooding man-for-hire who falls in love with a beautiful woman from afar, you won't be able to put this action-packed romance down.