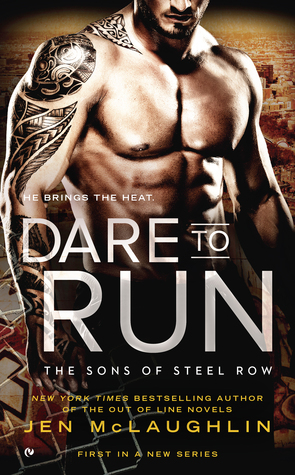 She knows what he’s like on Boston’s mean streets. Now she’s going to find out if he’s got some heart.

Lucas Donahue is not ashamed of his criminal past, but after a brief stint in prison, he’s ready to go legit and live a normal life. The problem is, no one leaves the gang without permission—even if he is one of the boss’s top men. Plus someone’s placed a hit on him. And then there’s that feisty little bartender who’s going to cause him even more trouble.

Heidi Greene knows to keep her distance from a ladies’ man like Lucas—even if she can’t keep her eyes off him. When he rescues her from an attack in the alley outside her bar, she’s forced to stay by his side for safety. But the longer she spends time with him, the greater her chances are for getting hurt in more ways than one.

I have had this book on my shelf for far too long and, since the third book is coming out soon, I wanted to finally give this book a chance. With dangerous men falling hard for a woman he'll do anything to protect, I couldn't wait to dive in. After spending some time in jail without giving up any information on Steel Row, Lucas Donahue is back working for the gang and finding himself climbing up in rank. While he'd love nothing more than to go straight and leave, no one leaves Steel Row voluntarily. Heidi Greene admits that Lucas is easy on the eyes and very intriguing, but she knows she can never get involved with a guy like him. But when he saves her from being attacked, Heidi finds herself having to be close to Lucas to ensure her safety from the guys who tried to hurt her, guys in another gang who don't like Lucas messing with them. While Lucas tries his best to resist the temptation of caring for someone as feisty and loyal as Heidi, he finds it harder to leave her alone, especially when her life is on the line because of him. From the beginning, there is a threat of violence to both Lucas and Heidi, which kept me on the edge of my seat for the whole book. Any time they stepped out on the street, you had no idea if someone would pop up to try to kill Lucas and Heidi. I loved how Heidi took Lucas's life in stride and didn't cower like so many other heroines of books with dangerous men do. It was refreshing to have a strong heroine who could take care of herself if she had to. It was so fun watching her bicker with Lucas and show him he can't always be the boss. While I did enjoy the danger and romance, I wish our characters got to do more. In order to protect Heidi, she spent most of her time locked up inside of Lucas's apartment. I wish she got to go more places and do more things instead of be cooped up inside of an apartment while Lucas got to run around trying to find a way to save himself and Heidi. Being trapped in his apartment, though, allowed Heidi to slowly break down Lucas's rough exterior and make him realize that he could have a woman in his life who he really cared for. Overall, Dare to Run offers a sexy and dangerous story where you want the rough guy in the gang to realize he really does have a soft heart. Heidi was the perfect woman to get under Lucas's skin and stand up to him. If you want a great romance with a dangerous, yet caring man who will do anything to protect those he loves, you need to pick up Dare to Run.