Book Review: The Allure of Julian Lefray by RS Grey

The Allure of Julian Lefray 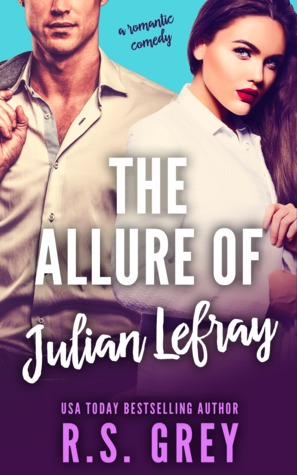 From: JosephineKeller@LLDesigns.com
To: LilyNBlack@gmail.com
Subject: Justin Timberlake Nudes!Lily, you predictable perv. I knew you’d open this email faster if I tempted you with a glimpse of JT's “PP”. Well, put your pants back on and grab some bubbly because I have much better news to share.I GOT A JOB!As of tomorrow, I’ll be the new executive assistant at Lorena Lefray Designs. I am SO excited, but there’s one itty bitty problem: I won’t be Lorena’s assistant. I’ll be working for her older brother, Julian.I know what you're thinking- "But Jo, what’s the problem?"Google him. Now. He’s the man in the fitted navy suit whose face reminds you that there’s hope yet for this cruel, ugly world. Keep scrolling…Do you see those dimples? Yup. That’s the Julian Lefray I will be reporting to tomorrow morning.Lord, help us all...XO,Jo

As you guys may now, I really love RS Grey's books and how smart and funny they can be. When I saw the two books in this companion series were only 99 cents for a few days, I didn't hesitate to snatch them up. And when I saw that the main character was a blogger, I couldn't wait to dive in!Josephine Keller has always wanted to work in fashion in New York, far away from the small Texas town she grew up in. But her time in New York has been far from glamorous and far more expensive than she had anticipated. When the opportunity comes up to be the assistant for a well known fashion designer, Jo knows she would be perfect for the job. Jo doesn't know, though, that the assistant position is actually for Julian Lefray, older brother to the owner of the company. Julian is instantly attracted to Jo from the moment he meets her and can't help but hire her to work for him. The longer they work together, the harder it is to fight their attraction while Jo tries to find her place in New York and Julian tries to save his sister's company. From the start, I really loved Jo's character. It was so cool how she was a fashion blogger and how honest she was with her readers. We got little snippets of her blog posts throughout, which I loved, and Jo was so transparent and honest with her readers. She is so down to earth and relatable, but still loves all things fashion and expensive. Jo proves to us that moving to New York to work in fashion really isn't as glamorous as shown on TV, but she will do everything in her power to make her dreams come true, which was very admirable. But let's get to the real reason why this book was awesome. Julian and Jo. I loved their chemistry and banter with one another. Working so closely since Jo is Julian's assistant, I loved how much time they spent together and how much they tried to convince themselves that they didn't like each other. I did feel like the ending was a bit rushed, but I really enjoyed watching them toy with each other and try to handle their insane attraction while still trying to keep things professional. Overall, this was another hit from RS Grey. With funny banter and insane chemistry between our characters, I couldn't stop reading. Jo was so refreshing and Julian was hot and so sweet when he let himself let down his walls. I would definitely recommend this series to any RS Grey fan!