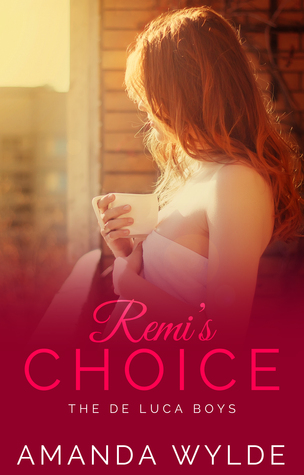 Sinfully sexy Travis De Luca came into Remi's life when she was young, inexperienced, and easily dazzled. With his scandalous words and wickedly sexy grins, he possessed a power no one should have over another. He was a foul mouthed, trouble-making thug to everyone else, but she'd witnessed the vulnerable side he hid so well. After one earth-shattering experience and his declaration of love, her body and soul were hooked.When Travis is sent away without warning, Kristiano De Luca—his equally sexy cousin—comes into Remi's life as a friend when she needs one most. After years with no word and waiting for Travis to come back, she loses hope, and the friendship she's built with Kris grows into something beautiful that fills the void Travis left behind.But a surprise return from Travis and one passionate night with him throw all their lives into chaos, and nothing will ever be the same again.

When the author contacted me to review her new book under an alter-ego name, I was intrigued. Who was this author? Not to mention the summary sounded like it would be a heart-wrenching romance I would love. I went in with high expectations and, unfortunately, wasn't as blown away as I wanted to be. Travis De Luca is a bad boy who loves to live up to his reputation. So whenever his brothers' babysitter is around, he loves turning her cheeks as red as her cherry colored hair. Remi feels an undeniable attracted to the dangerous Travis De Luca, but one mistake leads to Travis leaving and never coming back. Remi is heartbroken and when Travis's cousin, Kris, moves in a few months later, Remi finds a friend that she desperately needs in him. Years later, that friendship starts to bud into something more, but Travis comes crashing into her life again and Remi has to decide if she can put her heart through another heartbreak, or stay with the man she knows will keep her safe. Going into this, I knew that it would be a love triangle. I have no problem with love triangles if they are done well, but I just could not connect with Travis, which made this love triangle more annoying than anything else. I hated how crude Travis was and how obsessed he was with doing a certain something to Remi. Literally, it's all he talked about when they were being intimate and I was turned off from their whole relationship. I felt like the potential was there for Travis to be this tattooed, irresistible bad boy, but I think the sexy bad boy image was too over the top and not enticing at all. While I wasn't a huge Travis fan, I didn't really have any emotion towards Kris either. I felt like he was just there to be in the love triangle and I think that his character needed fleshed out a little more. I would have liked to know more about his past other than the fact that he was Travis's cousin and he had grown up with everything Travis hadn't. I felt like his drama that was added near the end that causes Remi to consider being with him was a cop-out to creating more drama with the love triangle and I didn't really care for it. Overall, I wanted so much more than what I got with this one. I'm still intrigued as to what author actually wrote this story, but I think the characters needed to be developed a bit more along with the main relationship. I didn't really buy into how hard and fast Remi and Travis's relationship began and how hung up they were on each other from then on. Overall, this one was a disappointment for me.