Book Review: Guardians of Paradise by WE Lawrence 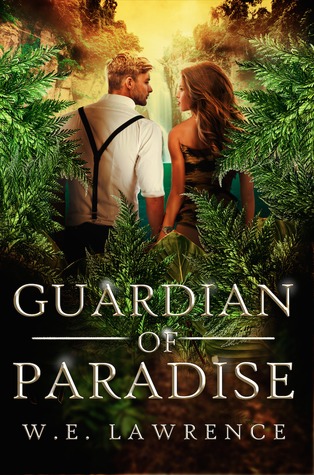 In 1888, Kira Wall, surviving daughter of missionaries swept away in a tsunami, lives a primitive, but enjoyable life with natives on an isolated island in the South Pacific. But her serene world is turned upside down when an Australian merchant ship, commanded by the sinister Captain Darcy Coleman, arrives with an overabundance of modern and lavish goods. Kira suspects ill intent. Chief Ariki refuses to listen to Kira’s warning, forcing her to uncover the real plan of the captain on her own. Unfortunately, she has a distraction. A six-foot tall, blond, and handsome distraction. Trevor Marshall, doctor and botanist, hopes to find exotic plants on the island to research new cures and medicines. He is dedicated to science, but when meeting the strong-willed, beautiful Kira Wall, he’d prefer to spend time researching her—all night. The captain thwarts Kira’s attempts to call him out at every step, turning the village chief against her. With only Trevor and her best friend Malana by her side, she stalks the captain and his officers through the dense, predator infested jungle, toward the island’s inactive volcano. Frustrated by her failure to reveal the captain’s true intentions, Kira begins to think maybe she’s wrong about everything. Then an explosion and earthquake bigger than anyone on the island has ever seen renews her resolve. Was the blast natural or man-made? She is determined to prove it was the captain’s doing. Kira races against time and the island people’s naivety to stop the captain from destroying her home and killing everyone she loves.

One look at this cover and I was very intrigued. Then, I saw that it was a historical romance and I could not wait to read the story inside. Ever since her parents died in a tsunami as missionaries on an island, Kira Wall has made a life for herself among the natives of the island. But when a ship of "merchants" shows up, Kira is wary about their motives for helping the natives. The chief of the island refuses to believe Kira's warnings about the men and welcomes them to their island. Kira needs to uncover what the men really want, but that's kind of hard with the tall and handsome Dr. Trevor Marshal who is on the island to study the plants for medicinal purposes. Showing Trevor around the island stirs up feelings that Kira never thought she could feel for a man, but can she really trust Trevor? The premise of this book was so promising. I mean, it's 1888 and there is a hunky doctor and a mystery to solve before Kira's island succumbs to the danger. Unfortunately, I couldn't really connect with Kira and got tired of her inexperienced background when it came to the opposite sex. Literally every time she became even close to being intimate with Trevor, she would bring up how she's never felt that way before, how she can't feel that way, and how scared she was of feeling that way. I got it the first three times and it just got old after awhile. Not only was the romance lacking, but I found myself skimming through the last bits of the book because I was just over the whole mystery of what the men were actually doing on the island. The story seemed to draw out much more than it needed to and we learned what the men were really after about halfway through the book, which meant that I lost interest in the whole plot line a little bit after that. Overall, this book just didn't do it for me. While it did have romance and started out pretty interesting, it lacked a relatable character and relied too heavily on the inexperienced virgin trope. Also, the mystery/danger of the story didn't entice me and went on for far too long. If you want a thrilling, passionate historical romance, you won't find it with this one.