Book Review: The Nearness of You by Sareeta Domingo

The Nearness of You 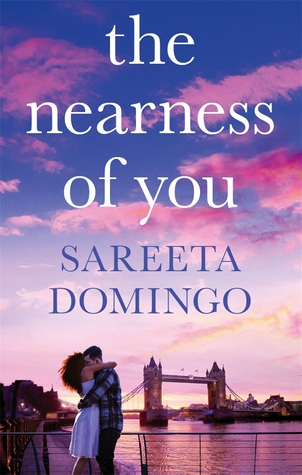 Falling in love isn't a choice...Since the moment they met, Ryan and Taylor have shared an unspoken bond. Taylor's drawn to Ryan more strongly than she thought possible and for some reason only he seems able to lift her out of the darkness in her past. But Ryan is with Marcy - her best friend. Marcy stood by Taylor when everything else had fallen apart, and Taylor refuses to risk their friendship now. Somehow she needs to resist what she's feeling. Yet, when Marcy leaves for a few weeks just as Ryan moves in to their shared flat, the tension grows to unbearable proportions. As the line between right and wrong becomes blurred, Taylor will have to decide whether she can - or should - turn away from what might be the love of her life.Evocative, moving and heartrendingly romantic, this is a story about real life, true love and the power of friendship.

Something you might not know about me is that I love London. I spent 6 weeks in London three years ago and fell in love with the city. So when I saw Tower Bridge on the cover of this novel, along with the entwined couple that screamed romance, I couldn't wait to read this story. From the moment they met in a very vulnerable state for the two of them, Ryan and Taylor have shared an inexplicable bond. But nothing can become of it because Ryan is with Marcy. Taylor's best friend. After he moves in with them, Taylor finds the tension between them unbearable at times, but she must stick up for the girl who stood by her through her worst moments. But when Marcy leaves for a few weeks, Taylor and Ryan are continuously drawn to each other and find it harder and harder to remember why they can't be together…Ugh, why are British books like 100% more lovable than American books? Just the mannerism and parts of speech that were so normal to them in this book seriously stole my heart. To me, this book reminded me of a British version of Something Borrowed with the whole my best friend is dating the guy I love trope and, you know what? I loved every minute of it. Taylor was actually not really a likable character, but I found myself absolutely loving her because of how raw and relatable she was. She has had some crappy things happen in her life and she's just not in a great place in her life. Not to mention the guy she loves is sleeping with her best friend down the hall. Ugh, my heart just breaks for her!I was so engrossed in this story that I never wanted to put it down. Taylor and Ryan tried so hard to not want each other and to try and be happy with other people, but that's not as easy as it sounds. While the story may be cliche to some, I really loved Ryan's character and how Marcy was actually a really likable character and you really understood why Ryan and Taylor couldn't be together. Did I mention that they're British? Because they are. And it was awesome. Overall, I loved how quirky, raw, and real this book was. Taylor is pretty much the least perfect person out there and she has real insecurities and sad moments that we all have. It was refreshing to have such real and flawed main character. If you want a real, forbidden (and British!) love story with a main character whose fragile state is something we all can relate to, you need to pick up The Nearness of You.