Book Review: Theirs to Keep by Maya Banks 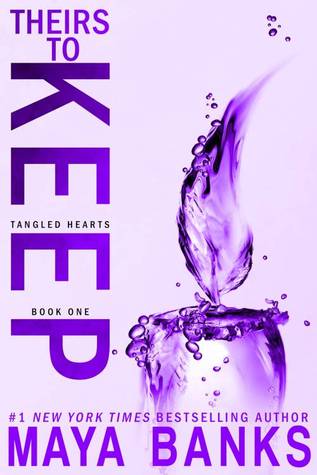 Summary: When Cade Winslow and Merrick Sullivan find Elle hiding in the cabinet of a gun store, they know they can’t just walk away from the fragile woman with no memory of who she is or who tried to kill her. Merrick is training for the title shot in the heavyweight division as a mixed martial artist and can’t afford distractions, but neither can he turn his back on the woman who tugs at his heartstrings.
Elle feels safe with her two protectors, and the longer she spends with them, the more she realizes that she has no desire to remember her past. Not when it could compromise her future with Cade and Merrick.Cade has his own set of concerns when it comes to Elle, and it quickly becomes clear to the two men that for the first time in their friendship, a woman is coming between them. But what if they just kept her there? Between them. Where she belongs.

Review: I absolutely fell in love with Maya Banks's Breathless series, so when I saw that she had a new series coming out, I was beyond excited. I didn't even read the summary going into this one, because as long as it came from Maya Banks, I knew it was going to be a steamy romance that I wouldn't be able to put down.
When Elle is found within an inch of her life, hiding in the cabinet of a liquor store with absolutely no idea who she is, Merrick and Cade know they can't just leave her alone. Terrified of the police with absolutely no idea why, all Elle can do is let these men take her in and try to piece together why she was beaten and almost killed. Soon, though, both men find themselves feeling things for Elle they know both of them can't continue feeling, especially given the fact that they're best friends. And with Merrick training to be the new heavy-weight champion, he can't afford distraction. But Elle has feelings for both of them too, and isn't sure if she wants to remember a past when she feels so safe with these two strong, protective men. Both of them want to keep Elle for themselves, leaving her unknown, tragic past forgotten for good. Hmmmm I'm not sure if I really really loved this book like I did Maya's other books. Don't get me wrong, Maya Banks is a phenomenal author and I loved the way she wrote this book, but I don't think I'm a fan of the two guys with one girl thing. The progression of their relationship was really sweet and I liked the depth of how they really cared for Elle. What girl wouldn't want to super protective, caring guys to be completely in love with her? In the end, though, I think I would have liked the story better if Elle had chosen one of them instead of establishing a relationship with both men. The whole aspect of Elle not having a clue who she is, but knowing she's deathly afraid of the police, is a really intriguing part of the book. Who is Elle? Who tried to kill her? And as she remembers more bits and pieces, Elle doesn't know what kind of life she had left behind and if anyone is missing her. Either way, she's perfectly content with her life with Merrick and Cade, and she's not sure if she even wants to remember such a painful past. With Merrick and Cade, I kind of wish we got more into their individual characters. They both had feelings for Elle, but I think they kind of blended into each other and I wanted more about both of them to make them distinct from each other. I think they made great male leads for this story, but I think they had to both stand out as two heroes instead of blend into one hero. Am I making sense? They needed to be more separate and individually prominent than they actually were. While the relationship wasn't my absolute favorite, Maya Banks has still created a steamy romance that certainly held my attention. I flew through the story and really liked Elle as a main character. The mystery of her past added more intrigue and the relationships were nice and developed before any real heat came in, which is just the way I like it. This may not be the best book I've read by Maya Banks, but it was certainly a passionate, entertaining read.