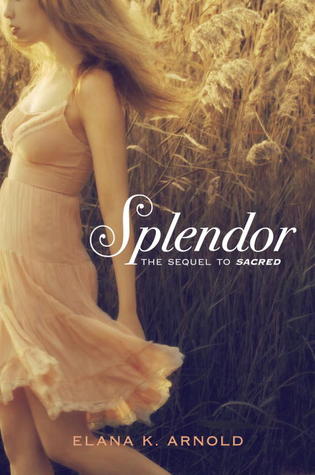 Summary: Splendor, the stunning sequel to Sacred, is a story about changing friendships, family, romance, passion, the study of Kabbalah, and self-discovery.

Sometimes the answers we seek aren’t ours to find. . . .

Scarlett loves her boyfriend, the dashing, mysterious Will Cohen. But now he’s gone east for college, and Scarlett is stuck home on Catalina Island. Senior year should be a breeze, but between dealing with her parents’ separation and her wild best friend, Lily, things are off to a rocky start. And then there’s Gunner. Dangerous, dark, ferociously attractive Gunner. Lily’s potential boyfriend, Gunner . . .

Scarlett distracts herself by spending time with her horse and delving into ecstatic mysticism, a way to practice Kabbalah. Through this practice, she hopes to learn to control her emotions, and begin to make sense of her place in the world. But Scarlett’s world is increasingly unrecognizable.
Are Lily and Scarlett becoming too different to stay friends? Is Will still the love of Scarlett’s life, even though she has feelings for Gunner? Does being in love mean only being attracted to one person? The more Scarlett questions, the fewer answers there seem to be.

Review: I read Sacred, the book that comes before Splendor, way back in January and I thought it was just an okay read. So when Splendor showed up in my mailbox, I went back and forth on wether I wanted to read it. I finally decided to give it a try and I'm pleased to say the sequel was much, much better!
With her boyfriend Will off to college all the way across the country, Scarlett is stuck at home dealing with even more problems than before. After having to recover from losing her brother the year before, Scarlett has to now deal with her parents' separation and her best friend Lily's wild out lashes. Not to mention the mysterious, and British, Gunner shows up and Scarlett feels things for him she shouldn't be feeling with Will in the picture. Scarlett tries to find solace with her horse and studying ecstatic mysticism to learn more about her emotions and Will's supernatural situation, but life keeps on throwing more curveballs her way. Scarlett's life is changing and she has to figure out just exactly who it is she wants to be now. I'm so, so happy that the problems I had with the first book were not at all present in this one. First, I really loved Scarlett's character now that she has finally gotten control of herself after her brother's death. While you would think finally having Will as a boyfriend would make her completely dependent on him, she's really not. Instead, Elana K Arnold has created a very realistic relationship where, when Will goes off to college, they know that they love each other but aren't sure if they're really going to be together forever. That being said, both of them discover new things about themselves and have attractions for other people, and they have to deal with their own relationship as well as their feelings for others. I was relieved they didn't become obsessed with each other when Will went to school, and really had lives apart from their relationship with each other.What kind of put me off of this one, though, was Scarlett's attraction to Gunner. I get that she's supposed to be confused about her emotions and relationship with Will now that he's not there, but I did not get her attraction to Gunner at all. It seems like he showed up and everyone fell in love with him. Including Scarlett. I feel like there should have been either more attraction on both of their parts, or a growing to like him as she go to know him. Instead, she seemed to hate him, yet become more attracted to him, as she spent more time with him. I think his character was just really weird and I wasn't a fan of his smoking and drug use. I get what the author was trying to do with his character, I just don't think the chemistry in Scarlett's attraction to him was really there. Other than Gunner, though, this book was fantastic. I loved the new characters Scarlett meets, and I loved how both Will's dad and Lily's family become more involved in Scarlett's life. The whole religious aspect with Will's dad was much more toned down, and I liked how that was inserted into the story with their friend Sabine. And Will. Oh Will. I loved him so much in this book, but I remember not really caring for him in the first one. While he isn't in a whole lot of this book, his presence is still there and I really liked the moments where he actually was a part of the story. So overall, Splendor was a really great sequel to Sacred. The characters were great and Scarlett grows even more than she did in the first book. There is a huge plot twist nearish the end of the book, and I was like, "What!?" Totally wasn't expecting that! So that definitely held my attention and kept me reading. My only problem was the whole Gunner aspect, but I really enjoyed the rest of Scarlett's story. If you read Sacred, I'd definitely recommend picking up the sequel. You get an even better novel and really grow to love all of the characters you might not have been all that connected to the first time around.

Posted by Jessica (Peace Love Books) at 9:54 AM