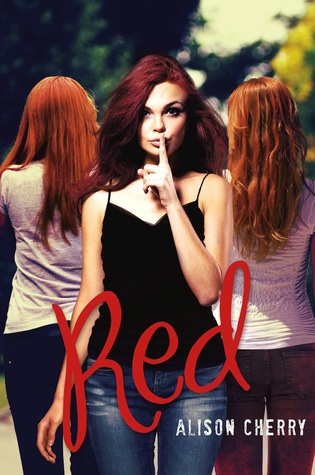 Summary: Felicity St. John has it all—loyal best friends, a hot guy, and artistic talent. And she’s right on track to win the Miss Scarlet pageant. Her perfect life is possible because of just one thing: her long, wavy, coppery red hair.
Having red hair is all that matters in Scarletville. Redheads hold all the power—and everybody knows it. That’s why Felicity is scared down to her roots when she receives an anonymous note:I know your secret.Because Felicity is a big fake. Her hair color comes straight out of a bottle. And if anyone discovered the truth, she’d be a social outcast faster than she could say "strawberry blond." Her mother would disown her, her friends would shun her, and her boyfriend would dump her. And forget about winning that pageant crown and the prize money that comes with it—money that would allow her to fulfill her dream of going to art school.Felicity isn’t about to let someone blackmail her life away. But just how far is she willing to go to protect her red cred?


Review: I really really wanted to like this book more than I actually did. I love the cover and the synopsis seemed like I was in for a unique read about high school life. There were too many factors that sort of bugged me, though, that kept me from really enjoying the story.
Felicity has lived in Scarletville all her life, thriving as a popular girl with the perfect boyfriend, friends, and hair. Little does everyone know, Felicity's a fake. In a town where redheads are above all, Felicity has been dying her hair from its strawberry blonde natural color in order to fit in with the rest of the town. But someone knows her secret, and they want to blackmail Felicity into doing things no redhead would ever do. And with the Miss Scarlet pageant approaching, the pageant her mother has been training her to win for her entire life, Felicity has to figure out how far she's willing to go in order to protect her secret. While the story was definitely unique and intriguing, it lacked a main character I could really connect with. I know it'd be insane to have to live in a town where your status was determined by your hair color, but the people of the town just seemed crazy. I sort of liked Felicity, but her attitude towards pretty much everything in life was kind of annoying. She thought her boyfriend was just "okay" yet she had to stay with him for her "red cred." She was OBSESSED with her red cred and it just got to the point where she seemed shallow to me. Not to mention she was kind of mean to her friends, supposedly her best friends since preschool, and wouldn't confide in them. Then, she was suspicious of them and thought they were doing things that no friend who had known you since preschool would do. Then, I wasn't a big fan of the romance. It was VERY clear from the start that Felicity didn't like her boyfriend and it was so obvious that wasn't going to last. Then, it was obvious who her new love interest would be. I would have been fine for all of the obvious factors in the situation, except for the fact that the romance between the new guy wasn't all that developed and nothing really even happened until abruptly, yet expectedly, at the end. I wish there was more build up and time on that relationship instead of the story obsessing over the pageant and Felicity's secret. There's only so much I could stand of Felicity fearing people would find out her secret. So overall, this book was just okay. The story was unique and interesting at times, but the characters and romance fell flat for me. I don't even think I had a favorite character from this book. The mom was crazy and not that realistic with how selfish she was when it came to her children. Yeah, there are parents who live through their kids, but she took it to an entirely new level. If you have the time, I'd say you could pick this book up if it sounds like something you'd like. But this definitely wouldn't be my first YA pick for my next book to read.

Posted by Jessica (Peace Love Books) at 6:54 AM