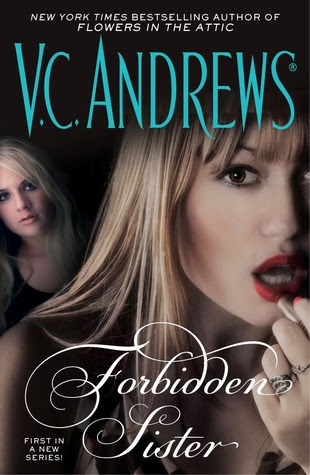 Summary: I HAD EVERY REASON TO HATE HER, MY FORBIDDEN SISTER. SHE WAS LIKE SOMEONE WHO HAD DIED BUT WOULDN’T STAY BURIED. . . . Bestselling author V.C. Andrews unlocks an adventure of intrigue and temptation that shatters the innocence of a girl in search of the sister she’s never known.
Emmie Wilcox was only six when her older sister, Roxy, was thrown out of their New York City apartment. Their stern father’s military-style rules left no room for rebellion, and Roxy was continually defiant and rebellious. Emmie, now an outstanding student at a private school, is obedient, respectful, a fille parfaite, as her Parisian-born mother lovingly calls her. Two sisters, total opposites—yet Emmie is secretly obsessed with the mystery and imposed silence surrounding Roxy: What had she finally done to deserve being cast out of her home? Where is she now? Emmie can’t help but wonder if there is a hidden side to her that resembles Roxy’s defiant nature. Sometimes she fantasizes that she is more like Roxy than she appears. Sometimes she wants to be. She wants excitement, and being a good girl all the time is harder than it seems. Finally learning that Roxy is a highly paid escort to wealthy and powerful men, Emmie goes behind her father’s back to track down and spy on the sister she can’t help but be fascinated with, a sister whose influence might run deeper than Emmie ever dreamed.In a tale twisting with heart-pounding suspense, shocking revelations, and the compelling family drama for which V.C. Andrews is known, Forbidden Sister introduces two new original heroines to capture any reader’s imagination.

Review: Looking at this cover and reading the summary, I thought I was in for a book that was going to be full of secrets, drama, and scandals. It turned out to be a watered down version of what could have been a really exciting read.
Emmie's older sister Roxy was thrown out by their parents when Emmie was only six, leaving her with the faded memory of a rebellious girl who defied their parents time and time again. Emmie's strict father would not let anyone even utter Roxy's name and their lives went on as if she had never existed. But Emmie can't help but become obsessed with her mysterious sister and when she learns that she's an escort right there in the city, Emmie decides to go behind her father's back and find answers about her forbidden sister on her own. The whole idea that Emmie has this sister that they act like doesn't exist sounds like something big would happen sometime down the road in the story. A big chunk of the plot, though, is just Emmie talking about how much she hates her life and I feel like same things happen over and over again. It was definitely an interesting read, but it seemed so dull compared to what the summary sounded like. Going on to the other characters of the book, I really didn't like any of them. Chastity was just really clingy and annoying, all of the girls at school were mean, and even the guys in Emmie's life ended up being complete jerks. I guess that's how Emmie saw them in her own life, so that's how they were portrayed to us, but I wish there were some more likable characters other than the main character herself. So overeall, this book wasn't everything I was expecting, but it was still enjoyable. I kept on reading because I really wanted to know what would happen to Emmie and how she would react to the different situations thrown her way. In the end, though, I just felt like there could have been a lot more hype and scandal than there actually was. I'm still anxious for the next book to come out, though, because I really want to hear Roxy's story. Hopefully then I'll get the intrigue and excitement I was hoping to get from this one.