Book Review: Someone to Wed by Mary Balogh

Someone to Wed (Westcott #3) 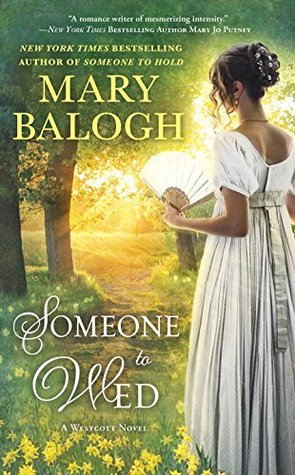 A very practical marriage makes Alexander Westcott question his heart in the latest Regency romance from the New York Times bestselling author of Someone to Hold.

When Alexander Westcott becomes the new Earl of Riverdale, he inherits a title he never wanted and a failing country estate he can’t afford. But he fully intends to do everything in his power to undo years of neglect and give the people who depend on him a better life. . . .

A recluse for more than twenty years, Wren Heyden wants one thing out of life: marriage. With her vast fortune, she sets her sights on buying a husband. But when she makes the desperate—and oh-so-dashing—earl a startlingly unexpected proposal, Alex will only agree to a proper courtship, hoping for at least friendship and respect to develop between them. He is totally unprepared for the desire that overwhelms him when Wren finally lifts the veils that hide the secrets of her past. . . .

I rarely get to read historical romances these days, so I gobble them up when I finally have the chance to pick one up. The premise to Someone to Wed sounded so unique and I couldn't wait to read it! Alexander Wescott never thought he'd be the Earl of Riverdale, but when he inherits the title, he has a lot of work to do to update the family estate. When he's invited to his neighbor's house for a meeting, the last thing he expects to receive is a marriage proposal. Wren Heyden has never left the house without a veil and prefers her time alone due to the large birthmark on the side of her face. She has made a life for herself at her uncle's estate, but now that he has passed with his wife, she has a vast fortune and is in desire of a husband. After meeting a few prospects, she knows that the Earl of Riverdale would be perfect for the job, especially since he is in need of the money she has to offer. Alex agrees only if Wren will enter a courtship with him, and he's shocked to find himself falling for the intriguing woman behind the veil. From the moment I started this book, I was so in love with Wren's character. She was such a strong female trying to overcome the hurt and abuse she experienced as a child because of her face. I hated how much she let her birthmark define her life, but I also loved how she became such a successful businesswoman and went after what she wanted, which, in this case, was Alex. Alex was such a perfect gentleman and I loved how honest of a man he was. He wasn't ready to just take Wren's money and marry her. No, instead, he wanted to actually get to know her and become friends before they agreed to marriage. What I loved most about this book and their courtship was how much Wren changed throughout this story. She was so sure people would only see her for her birthmark, but Alex was convinced to show her that people looked at HER, not her birthmark. I loved how he brought her out of her shell and made her realize what it was like to have a family and actually enjoy being around people. Gah, it was just so gosh darn cute!Overall, I really enjoyed this historical romance. While it did slow down near the end, the slow build of this romance was perfect and I loved the change these characters experienced. If you're a historical romance fan, you have to check out Someone to Wed!