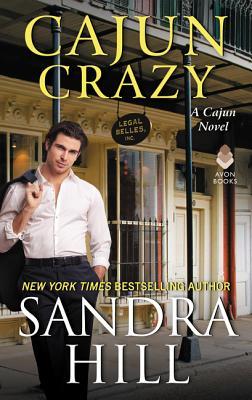 Former Chicago cop Simone LeDeux is back home in the bayou, sharing a double wide in the Pearly Gates trailer park to help her mama recover from surgery. Her one rule: no Cajun men. Loved and left by too many double-crossing Cajuns, Simone puts bad experience to good use by opening Legal Belles: an agency that uncovers cheating spouses.

Suddenly she’s confronting a two-timer about to swindle his wife out of millions and antagonizing New Orleans bigwigs over an illegal sex club. Adam Lanier learns of the dangerous game Simone is playing . . . and the sexy single dad comes to her aid. Known as a rogue in the courtroom and a player in the bedroom, the ragin’ Cajun has Simone triply on guard.

With their crazy chemistry, danger on their trail, and infamous LeDeux relative Tante Lulu working her magical matchmaking, the bayou has never been this steamy.

I love a good romance, especially the ones Avon puts out, so I couldn't resist picking up Cajun Crazy. While this is book 11 in the series, I decided to pick it up without reading the previous books for a fun, crazy romance.
After three failed marriages, Simone LeDeux is back home living with her mom as she recovers from a knee injury. Even after living in Chicago, Simone realizes her one true vice is Cajun men and is determined to swear them off as she opens up her own investigative business where she finds cheaters and puts them in their place through the court of law. Single dad and lawyer Adam Lanier is intrigued the moment he lays eyes on Simone, but he's out of luck when she tells him she's sworn off Cajun men. That doesn't stop him from flirting and thinking about her 24/7. When Simone needs his help with her business, Adam doesn't hesitate to come to her aid. The more time they spend together, the more sparks fly, and the harder Simone finds it to resist another Cajun man…When I first started this book, I was immediately bombarded with SO MANY CHARACTERS. I thought I could go into this as a standalone, which I guess you can, but so many characters came in and out of the storyline and it was so hard to keep track of. I think if I had read a few of the previous books, I would find it easier to jump into this world. What made this so hard to follow was that even though Simone and Adam are our main characters, the POV was 3rd person and would switch between so many different characters in a limited POV (meaning we followed them and only had their minds/perspective through a narrator for that chapter). What bothered me was that in the middle of a chapter, it would switch to follow another character. I really am not a fan when books do this, so it was hard to feel connected to our main couple when the plot was jumping around between other characters so much. While this book was definitely unique in the sense that it had some pretty crazy and outrageous characters, the craziness felt too crazy at times. The author took Cajun to the extreme and it was hard for me to take the characters seriously, especially Simone's mom and aunt. I feel like this was purposeful, but I just wasn't a fan and found the accents pretty irritating. While the romance and storyline had the potential of being really intriguing and enjoyable, there were too many aspects that were distracting me from actually enjoying the story. I love a good mystery and cop romance (Simone used to be a cop in Chicago), but this took a lot of focus on my part and I didn't connect with the main couple as much as I wanted to.

About the Author
Sandra Hill is a graduate of Penn State and worked for more than ten years as a features writer and education editor for publications in New Jersey and Pennsylvania. Writing about serious issues taught her the merits of seeking the lighter side of even the darkest stories.