Book Review: The Hook Up by Kristen Callihan 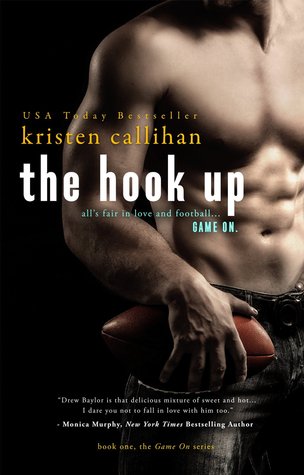 The rules: no kissing on the mouth, no staying the night, no telling anyone, and above all… No falling in love.Anna Jones just wants to finish college and figure out her life. Falling for star quarterback Drew Baylor is certainly not on her to do list. Confident and charming, he lives in the limelight and is way too gorgeous for his own good. If only she could ignore his heated stares and stop thinking about doing hot and dirty things with him. Easy right?Too bad he’s committed to making her break every rule…Football has been good to Drew. It’s given him recognition, two National Championships, and the Heisman. But what he really craves is sexy yet prickly Anna Jones. Her cutting humor and blatant disregard for his fame turns him on like nothing else. But there’s one problem: she's shut him down. Completely.That is until a chance encounter leads to the hottest sex of their lives, along with the possibility of something great. Unfortunately, Anna wants it to remain a hook up. Now it’s up to Drew to tempt her with more: more sex, more satisfaction, more time with him. Until she’s truly hooked. It's a good thing Drew knows all about winning.All’s fair in love and football…Game on.

This book has been on my TBR for SOOOO LONNGGGG. I have meant to pick it up so many times throughout 2017, but I just never did. I finally decided enough was enough and picked it up last week and cannot believe I've waited this long to read this amazing sport romance!Drew Baylor is the golden boy. He is a Heisman winner and quarterback of his college football team. He knows where his future is taking him and he can't wait. Anna Jones, on the other hand, has no clue what she wants to do when she graduates college and needs to focus on her life. When Anna and Drew have a class together, Drew knows he needs to know the redhead in his class, but Anna wants nothing to do with him. When they continue to run into each other, though, Anna and Drew can't deny their chemistry and agree to keep things strictly physical. But what happens when they both grow feelings for one another when they promised to simply be a hook up? I have to start off by saying that when I started this book, it took me a long time to get into it. Four days passed and I had only read 150 pages. Once I hit the halfway mark, though, I devoured the second half of the novel in one night. This started off very college-ey where the couple went to parties, saw each other in class, and wanted to keep their relationship super casual. I have been very picky about my college romances lately, so I was just meh about the story. Then, things got so serious and tested the relationship between Anna and Drew and I was all for it. Drew was so freaking adorable and I loved how much he truly like just being around Anna. Seriously, Drew sounds like the perfect boyfriend and I want him for myself!I was only a little annoyed with how insecure Anna was. Don't get me wrong, I was happy to finally have a heroine who had some insecurity and didn't think she was worth the attention of the hot shot football player, but it was annoying how she let other people's opinions dictate her relationship. Drew got annoyed with that aspect of Anna's character and so did I. Other than that, though, their trials and fears were so realistic and relatable. I was obsessed with this story by the end and I didn't want to stop reading!Overall, this has definitely become one of my new favorite sports romances. This reminded me a lot of the Off-Campus series by Elle Kennedy. We got lots of sports, some endearing teammates of our hero, and a swoon-worthy romance. If you are a new adult sports romance fan, you HAVE to pick up The Hook Up!