Blog Tour + Giveaway: Because You Love to Hate Me (Q&A with Samantha Shannon and Regan Perusse)

I have been a huge fan of Booktube for years, so when I saw this book was coming out, I was so excited. Some amazing authors were pairing with some of my favorite bookstubers and I couldn't wait to see how it turned out! As part of this blog tour, I was able to read the book and have a Q&A with Samantha Shannon and Regan Perusse (one of my most favorite booktubers ever, even though we don't have the same taste in books at all. She's just so fun to watch!). Enjoy!

1. If you could be any villain, who would you be and why?


Samantha: Maleficent. Those cheekbones. Those horns. That fearsome outfit. And who wouldn't want to be able to turn into a dragon at will?

Regan: If I could be any villain I think I would have to go with Loki. Not only does he have glamorous hair and magic, but he is gray in morality. I feel given the chance perhaps he could end up being a good guy? I suppose my answer is a bit of a cop-out, but I can’t help it – I love the guy!

2. What hero do you think would make a great villain and why? It could be from any story, classic or recent.


Samantha: Robin Hood would be pretty easy to twist into a villain. In some versions of the tale, he and his Merry Men were not above violence -- for example, in one ballad, Mulch the Miller's Son kills a young boy to silence him, and one fifteenth-century text describes Robin as a siccarius ("knife man" or "cutthroat"), implying that he wasn't just stealing, but killing.

Regan: I think Kaz Brekker would be a fantastic villain. To be fair, he is considered a villain by a large amount of people in his world so I feel like his transition could be quite seamless. Not to mention he already has a lot of underworld connections, which I feel like would allow him to become 100% bad very easily (versus the 50% bad he currently is) and I would be 100% into it.

3. If you had to choose a classic or fairytale to retell in your own novel, what would you choose and why?


Samantha: There are many, many stories I'd love to retell. One of those is that of Saint George and the Dragon, which I have retold in a high fantasy context in my upcoming novel The Priory of the Orange Tree, with George as a less-than-heroic figure. That story -- the ultimate tale of a damsel in distress -- has been screaming for a hefty dose of girl power for centuries. (And here's something I've never told a soul: the Bone Season series is a partial re-imagining of a myth.)

4. If you could ask any author to write you anything, who would it be and what would you ask them to write?


Regan: I am going to exclude Harry Potter as a possible choice to this question (because if this was real possibility my answer will always be Harry Potter).

I would have Patrick Rothfuss write me a pirate centered fantasy story. Patrick Rothfuss just has the most wonderful writing and I absolutely love his characters. I feel very strongly he could create a fantastic swashbuckling pirate story full of sword fighting, romance, and adventure.

Thank you so much to Samantha and Regan for answering my questions!!


Because You Love to Hate Me
Release Date: July 11, 2017
Source: Publisher
Goodreads

Win a copy of Because You Love to Hate Me! US/Canada only. 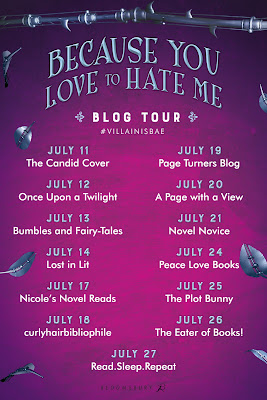