Book Review: Checkmate: This is Dangerous by Kennedy Fox

Checkmate: This is Dangerous (Logan and Kayla #1) (Checkmate Duet #5) 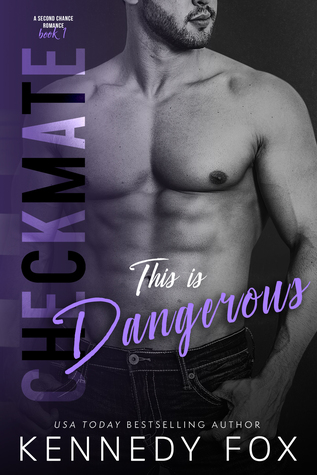 Logan Knight is a real life knight in shining armor.  A detective godsend in a sleek black suit has me thinking less than secretive thoughts. Brooding and mysterious, he’s the kind of guy every girl instantly notices. Between his seductive smirk and charming good looks, it’s no wonder I can’t help the way he makes me feel whenever I’m near him.  Too bad he’s unavailable—or so he says.He thinks I’m a do-gooder who shouldn’t get involved with a guy like him. His past is messy and relationships just add to that. He insists the timing is all wrong and he’s devoted to his career, but I don’t buy that excuse for a second. I see the way his body tenses and his jaw ticks every time another guy is around me. He just won’t admit it, but I’m more determined than ever to show him what he’s missing. I’m a devoted animal rescuer and I’ll risk everything to save them, but when a dramatic turn of events puts both our lives at risk, I’m positive Logan will write me off for good. But when he asks for my help with a personal crisis, I know it’s my last chance to finally show him I can handle anything he throws my way—messy past and all.He might think he has me all figured out, but I’ll prove him wrong no matter what he thinks. This game of push and pull has me running in circles. One wrong move and we could both lose.Checkmate, Knight.

Kennedy Fox writes such fun romances and after seeing the chemistry between Kayla and Logan in the previous books, I was so excited for their story. As a mama of two dogs myself, I couldn't wait to read about a girl who loved dogs falling for a detective. Logan Knight is a mystery. He's a detective and keeps everyone he meets at arm's length, especially Kayla. Kayla can't deny her attraction to Logan and the fact that he always seem to be her knight in shining armor whenever she's in trouble. When Kayla discovers Logan's secret, she is in even more awe of the man who has become an even bigger part of her life. Kayla is ready to dive head first into something with the brooding, mysterious man, but can Logan trust anyone with his heart when he has so much to lose?I've got to say, I definitely connected with Kayla's character from the start. I loved how she had three dogs and volunteered at a dog shelter in her spare time. While I have two dogs of my own, reading this made me want to visit my local shelter and pick up another fur baby! Kayla was just such a good person and all I wanted was the best for her. I do have to say I was a little thrown off by the secret that Logan discovered about her halfway through the book. It seemed completely out of character for Kayla and nothing was even slightly hinted about that until only after Logan discovered it. I wanted more of a build up to that secret instead of feeling it was thrown in randomly for dramatic affect. I really did enjoy how slowly the relationship developed between Logan and Kayla. Logan had a real reason to not want to start a relationship, but it was fun watching him realize how attracted he was to Kayla, not only physically but emotionally as well. I loved how well Kayla fit into his life and how well they just gelled together. There were also some laugh out loud moments, which I really enjoyed. And that ending! Not sure how I felt about it, but it definitely had me dying to have the second book already!Overall, I really enjoyed this next installment in the Checkmate series by this secret author duo. Kayla is probably my favorite heroine of the series and I loved watching her break down Logan's hard exterior to find the sweet (and….passionate) man underneath.