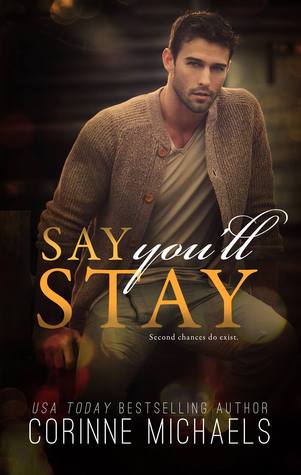 One word. Stay. It was all he had to do. Instead, he got on that bus and took my heart with him. That was seventeen years ago. I moved on. Marriage. Kids. White picket fence. Everything I ever wanted, but my husband betrayed me and I was left once again. Alone, penniless, and with two boys, I had no choice but to return to Tennessee. He wasn’t supposed to be there. I should’ve been safe. However, fate has a way of stepping in.This time around, the tables are turned. It’s my decision. Second chances do exist, but I don’t know if we can repair what’s already been broken . . .

When I was contacted by Corinne to review the first book in her Return to Me series, I did not hesitate to say yes. I have had my eye on these books for so long and I was so ready for a yummy romance! Seventeen years ago, Presley's heart was broken by the love of her life. When he left, Presley grieved but moved on, got married, had kids. But when her world comes crashing down, Presley finds herself moving with her twin sons back home to the small town she hasn't stepped foot in since she left for college. The last person she expects to find is Zach. All the emotions and pain come rushing back, mixing with the pain from her current tragedy. Presley wants nothing to do with Zach, but the town and fate keep pushing them together and Presley is forced to face her past mistakes and reevaluate where she wants her future to go. From the first chapter of this book, the story just screamed emotion. I was so heart broken over what happened to Presley and how she had to return to a life that she had given up on so many years ago. I really appreciated how this second chance romance was between two people in their 30s who have had the chance to love other people and make new lives without each other. Zach and Presley have both grown so much, but being back together proved to them that their bond was one of a kind and didn't disappear over time. What also made this book so good were the side characters and how involved they were in our main characters' lives. I absolutely loved Zach's brothers and Presley's family and how they were not so subtle about getting those two back together again. We got to fall in love with the side characters just as much as Zach and Presley and I cannot wait to read the rest of the books in this series. Oh, and I also loved how important Presley's sons were to the storyline and how she had to figure out how to make a better life not only for herself but for her sons as well. Overall, this book had all of the feels and second chance romance angst. While it was clear Zach and Presley had a connection like no other, it was really hard for both of them to find it in themselves to trust one another again. How do you forgive the person who completely and utterly destroyed your heart? If you want an emotional romance about two people who have learned to survive without one another but not truly live, you have to pick up this book!