Book Review: Kiss the Sky by Krista and Becca Ritchie 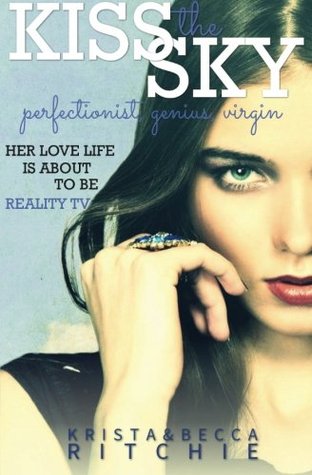 Virgin. Sex addict. Daredevil. Alcoholic. Smartass … Jackass. Her five friends are about to be filmed. Reality TV, be prepared.Rose Calloway thought she had everything under control. At twenty-three, she’s a Princeton graduate, an Academic Bowl champion, a fashion designer and the daughter of a Fortune 500 mogul. But with a sex addict as a sister and roommate, nothing comes easy. After accepting help from a producer, Rose agrees to have her life filmed for a reality television show. The Hollywood exec is her last chance to revive her struggling fashion line, and boundaries begin to blur as she’s forced to make nice with a man who always has his way. Twenty-four-year-old Connor Cobalt is a guy who bulldozes weak men. He’s confident, smart-as-hell and lives with his equally ambitious girlfriend, Rose Calloway. Connor has to find a way to protect Rose without ruining the show. Or else the producer will get what Connor has always wanted—Rose’s virginity.

I was already obsessed with this series after reading the previous books about Lily and Lo. I was definitely excited for Rose's story, but I had no idea I would fall madly in love with her and Connor's relationship and become even obsessed with their characters. After the world learns the Lily Calloway is a sex addict, Rose knows she has to salvage the family name. With her fashion brand on the line, Rose agrees to be a part of a new reality show, which means moving in with her sisters, friends, and boyfriend, Connor. Rose is a very headstrong, intelligent woman, but she's very insecure when it comes to her physical relationship with Connor. Connor doesn't believe in love, but he knows that he cares deeply for Rose and loves how much they push each other to be their best. But when this reality show starts to test the boundaries and relationships of everyone in the house, Connor needs to figure out how to protect Rose before he loses her forever. OH MY GOSH. Connor Cobalt. Can I have that man? Seriously. I loved how his presence alone could have such huge impact and calming affect on those around him. Not to mention his affect on Rose. Those two were just so gosh darn cute and I loved how much they loved each other but were still scared of losing one another. Both of them are such dedicated people, so it was hard for both of them to balance each other and still be successful in their respective life goals. Connor didn't push Rose at all when it came to the physical side of their relationship and I loved how patient, yet playful he was with her. Aside from the romance, as always with these books, I loved the friendships and family aspects present. Lily, Rose, and Daisy care so much for each other and I couldn't get enough of their fierce loyalty for one another. I also loved how close Connor and Lo were, even though those two are complete opposites. And can we talk about Daisy and Ryke? I have shipped those two so hard since they first met and I STILL HAVEN'T GOTTEN TO THEIR STORY YET. Gah, I really need to finish this series ASAP because I am addicted to these characters! What more can I say? This was another fantastic addition to the Addicted series and it left me dying for more. I fell more in love with Rose and Connor's characters and already miss this world. If you haven't yet, you must pick up the Addicted series! You are missing out on one of my favorite series with some of my favorite, broken yet lovable characters. So go pick it up! Now!