Book Review: Anything You Can Do by RS Grey

Anything You Can Do 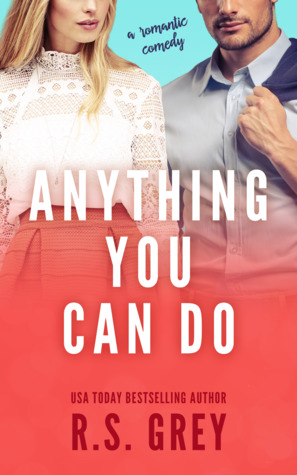 Lucas Thatcher has always been my enemy.It’s been a decade since I’ve seen him, but our years on opposite coasts were less of a lasting peace and more of a temporary cease-fire. Now that we’re both back in our small town, I know Lucas expects the same old war, but I’ve changed since high school—and from the looks of it, so has he.The arrogant boy who was my teenage rival is now a chiseled doctor armed with intimidating good looks. He is Lucas Thatcher 2.0, the new and improved version I’ll be competing with in the workplace instead of the schoolyard.I’m not worried; I’m a doctor now too, board-certified and sexy in a white coat. It almost feels like winning will be too easy—until Lucas unveils a tactic neither of us has ever used before: sexual warfare.The day he pushes me up against the wall and presses his lips to mine, I can’t help but wonder if he’s filling me with passion or poison. Every fleeting touch is perfect torture. With every stolen kiss, my walls crumble a little more. After all this time, Lucas knows exactly how to strip me of my defenses, but I’m in no hurry to surrender.Knowing thy enemy has never felt so good.

I have to start off this review by saying that RS Grey is one of my absolute favorite authors. I love Scoring Wilder and The Allure series and I always look forward to a new book by her. As an enemies to lovers romantic comedy, I couldn't wait to dig into this one. Sadly, I just couldn't connect with or enjoy the main character. Since they day they were born, Daisy and Lucas have been enemies. All throughout school they've competed to be the best and now, both 28 and back in their home town, they're back at each other's throats. Daisy assumes she's back to train under their town's doctor to take over his practice, but little does she know, Lucas has been hired to work right beside her. Determined to prove she is better than him and secure her future career, Daisy will do anything to win over the doctor and push Lucas out. Now that they're older, though, Daisy is starting to notice Lucas in ways she had never noticed before. Daisy knows she doesn't need the distraction that's becoming harder to resist… Like I said, this book sounded so promising, but from the very beginning I just couldn't click with Daisy's character. She is a 28-year-old doctor and still acts like a kid trying to win class president. Her need to beat Lucas was a bit juvenile and I just didn't really care for her. I think there needed to be some more substance to her past with Lucas and more time spent developing their characters. I liked her friendship with Madeleine, but I felt like we didn't really get a whole lot of that or if she had any friends while in college or med school. We didn't get a lot of Daisy's dating history either and only a gloss over of Lucas's. I just wanted more depth to who they were and then maybe I would have understood and liked Daisy's character more. While there were funny moments and I did enjoy when Lucas and Daisy bickered, the ending came up too fast and way too easily. I like it when characters really have to work at winning each other over and I felt like there was all this build up between our characters and the climax was over in a snap. In the end, I think it was the timing and pacing of the book that wasn't as complete and substantial as I wanted it to be. Overall, this wasn't my favorite from RS Grey. While the idea and outline was nice, I wanted a more likable main character and a more believable timeline. I know, though, that lots of other reviewers on Goodreads have loved this, so maybe it just wasn't my cup of tea.