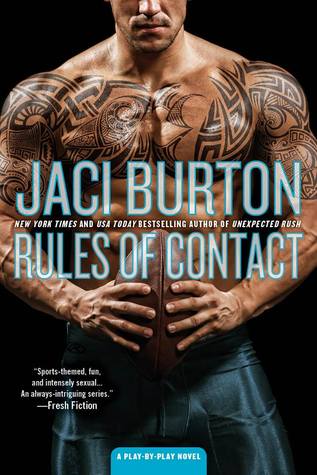 A defensive end for the San Francisco Sabers, Flynn Cassidy is used to being in the spotlight—he just doesn’t enjoy it. But if getting in front of the cameras will help his new restaurant succeed, he’s willing. Now if he could just meet a woman who loved him and not his fame… After her divorce, Amelia Lawrence is thrilled to start over as head chef at Ninety-Two. It’s just the opportunity she needs to heat up her career—if only she wasn’t wildly attracted to her sexy new boss. Their chemistry might be sizzling hot, but Amelia has no intention of being burned again.  Amelia is genuine and fun and Flynn can’t get enough of her—and Amelia loves every second she spends with the tough but tender Flynn. But trust is a hard fought battle for both of them. Breaking the rules of contact and surrendering to their passion was easy, but are they willing to risk their hearts to win at the game of love?

JUST LOOK AT THAT COVER. Oh my goodness, I knew that this was going to be my next read when I saw that cover. While I haven't read every book in this series, I was excited to meet yet another athlete and watch him fall in love. Flynn Cassidy is used to having the press around, seeing as he's a defensive end for the Sabers. Unfortunately, he's also used to women using him for the cameras and fame and has yet to find someone worth settling down with. Amelia Lawrence does not want to trust a man again after her divorce and is focusing on her career and passion for cooking. As the head chef of Ninety-Two, Flynn's new restaurant, Amelia finds herself spending more time with Flynn. Both are having fun and when things heat up, neither one of them knows if they're ready to fully trust in the other person. For some reason, no book in this series has really swept me off my feet. These books hold so much promise with hot athletes and a sexy romance, but I really didn't connect with either Flynn or Amelia. Then, since it's the 12th book in the series, there were so many side couples mentioned that it got hard to keep everyone straight and I felt like it was unnecessary. I liked Flynn enough, but nothing about him screamed that I had to love him. As for Amelia, she was nice enough, but I wasn't invested in her character and didn't care about her. I think if a little bit more was explained and explored in her past, I would have connected with them more. I did enjoy how Amelia and Flynn weren't really into each other that way at the beginning of the book and only realized their attracted after spending more time together. It was cute how Amelia got to meet Flynn's family and how open and welcome they were to her. There were definitely some hot moments in this book, but sometimes I felt like it those moments were overdone and the story included more than necessary. I wanted more about the characters and less about their physical time together. Overall, this wasn't a bad addition to the series, but I didn't find myself really caring for the characters. I wish we got more of their background and a more emotional connection to them. As the 12th book in the series, this wasn't bad read but don't expect an amazing romance.