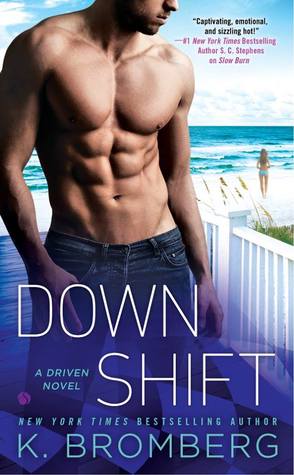 Behind the wheel, racing champion Zander Donavan is at the top of his game. But after too much excess in his personal life, he’s forced to step away. He needs to accomplish something all on his own—outside of his famous father’s shadow.   Getty Caster is running away from the abuse that clouds her past. She thinks she’s found the perfect escape—until she discovers a stranger in the beachside cottage she’d been promised. He’s undeniably sexy, but she’s there to heal. Alone. Before long though, fighting with each other turns into fighting their attraction. And giving into desire sets off a chain reaction that has their pasts colliding. With an unexpected love on the line, can they overcome the fallout to build a future?

When I saw that this book was about a race car driver, I was itching to get my hands on it. There is just something about a man who can drive a car fast that gets me every time. This sounded like it was going to be an emotional, but still fun, romance, so I was looking forward to picking it up. Zander Donavan is riding high on his career right now, but when his past continues to haunt him, he makes mistakes and risks the racing career he has worked so hard to earn. To get his thoughts and priorities straight, he escapes to a beachside cottage. Little does he know, he wasn't the only one promised solitude in the peaceful cottage. Getty Caster is trying to forget about an unhealthy relationship and a controlling father, and the small beachside town is just the place. But when she comes home from work to find Zander in her place of solace, she wants him gone. Zander doesn't mind Getty, though, and the more he puts himself in her path, the more Getty starts to warm up to him and acknowledge the intense attraction they have for one another. But coming from such broken places, can they both really find healing within one another? From the start, I really felt something for Getty and the past she was trying to run away from. No one deserves to be treated the way she was, and it was understandable why she was trying to keep everyone in her new life, especially Zander, at an arms length. Zander, though, is so broken and sweet and adorable and I couldn't get enough of him. He was running from some pretty serious demons and it was heartbreaking watching him try to come to terms with his past, but I loved how Getty was there to help him while he was helping her with her own past. My only issue with this book was that there were some slow parts, so it took me awhile to really get into the book. We slowly get to learn what is hurting both of our main characters, but once we're let into their pasts, things started to pick up and we get to see Zander and Getty open up to each other and slowly start to fall for each other. Overall, I really enjoyed this next addition to the Driven series. I am so in love with K Bromberg's ability to create lovable characters and romances that are both addicting and sweet. If you haven't yet, you must check out the Driven series! You don't know what you're missing out on!