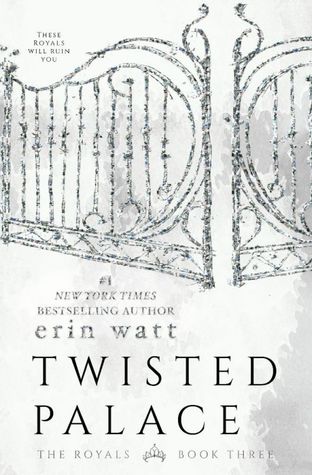 These Royals will ruin you…From mortal enemies to unexpected allies, two teenagers try to protect everything that matters most.Ella Harper has met every challenge that life has thrown her way. She’s tough, resilient, and willing to do whatever it takes to defend the people she loves, but the challenge of a long-lost father and a boyfriend whose life is on the line might be too much for even Ella to overcome.Reed Royal has a quick temper and even faster fists. But his tendency to meet every obstacle with violence has finally caught up with him. If he wants to save himself and the girl he loves, he’ll need to rise above his tortured past and tarnished reputation.No one believes Ella can survive the Royals. Everyone is sure Reed will destroy them all.They may be right.With everything and everyone conspiring to keep them apart, Ella and Reed must find a way to beat the law, save their families, and unravel all the secrets in their Twisted Palace.

The moment an e-arc of this book showed up on my Kindle, I could not stop thinking about it. Seriously, I was considering skipping school and calling in sick so that I could stay home and devour this book. Instead, I went to school and taught my classes. But you bet the moment I was home, I picked this book up and didn't put it down until I was done. Ella Harper and Reed Royal have had every challenge thrown their way to keep them apart. And this time is no different. Ella will do anything to keep Reed with her, but Reed's temper may have gotten him into trouble that's more dangerous than either of them had ever thought possible. Oh. My. Gosh. Since this is the third book of the series, I don't want to give too much away with my review, but this book picked up right after the cliffhanger of the last book. Once again, I was just DYING for Reed and Ella to get everything figured out and just be happy and together for once. Sadly, Reed had some serious problems he had to solve in this book and you really didn't know how he was going to get out of it until the very end. The heat was definitely turned up in this book between Ella and Reed and I absolutely loved every moment they had together. I have to admit, I did have some issues with this book. The reason I gave it a five star rating, though, was because I was still completely immersed in this story and literally could not put it down for the four hours it took me to fly through the story. The first thing that bothered me was how dominant a certain character was in this book. He came in at the end of the last book and practically takes over this entire story and controls Ella's life. Ella doesn't really act her normal headstrong self and instead lets this character have more control than she should. And while we spend the whole time wondering how Reed is going to get out of the mess he finds himself in, the ending occurred in maybe the last twenty pages of the story. I wish the ending had been a little more fleshed out and not as rushed as it was. While it did have its flaws, I was still OBSESSED with this story and am dying for more of this story. The authors definitely left more to be said about Easton and Gideon, so I hope they do a spin off stories on those two Royals so that we get more of this world. I was definitely satisfied with the ending and how Ella discovered the important things in her life. Just be warned that you'll be left wanting even more of these characters after the conclusion of Ella and Reed's story. Oh, and if you haven't picked this series up yet, WHAT ARE YOU DOING?!?! These books are easily some of my favorite reads this year and I cannot get over the crazy yet utterly lovable characters, the intense and addicting romance, and the twists and turns that awaited every turn of the page.