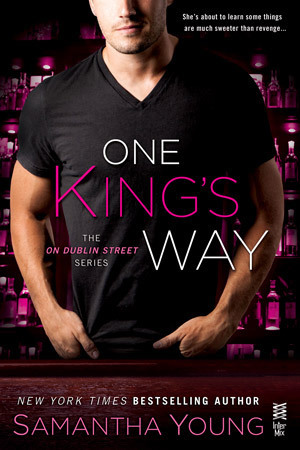 When he’s not working at the club, Craig Lanaghan looks out for his mother and little sisters. So when it comes to women, all he wants is a good time. But once Rain Alexander walks into his life, there’s no denying that this woman could be worth much more than a one-night stand….Rain’s lifelong regret is having left her sister Darcy alone years ago with a guardian who turned out to be abusive. So when Darcy’s boyfriend publicly humiliates her in a cruel way, Rain’s overprotective instincts kick in and she follows him to Club 39—where she meets a guy who just might be her perfect match.The chemistry between Rain and Craig is explosive, but Rain is out for revenge, and refuses to be sidetracked by flirtation. As things between them heat up, she’ll have to make a heartbreaking choice between giving in to the man of her dreams or putting her sister’s happiness first….

Samantha Young has been one of my favorite authors for a long time, so I was definitely excited to read this novella. One King's Way introduced yet another couple from the wonderful world of On Dublin Street and I could not wait to meet them! Craig Lanaghan is used to turning on the charm at the bar he works at and meeting girls for a good time. But when Rain Alexander walks into his bar, he can't take his eyes off of the 40s-esque woman who he feels himself wanting for much longer than one night. Rain's sister Darcy is everything to her, so after Darcy's life was ruined by an ex-boyfriend, Rain is determined to get revenge. She follows Rain's ex to bars that he frequents and wants to ruin him like he ruined her sister. But when she runs into Craig, she loses focus on her revenge and instead starts freaking out over the intense attraction she has on the flirty and gorgeous bartender who is determined to show her he wants her for much more than just a good time...As always in a Samantha Young book, I loved the intense chemistry and passion between our main characters. The problem I had with Craig and Rain, though, was that it felt a bit too insta-love for me. They didn't really get to know each other all that much before Craig was head over heels for Rain. I did like how Craig was the one who was positive about their relationship first instead of the girl being the typical one to fall for the guy first. Craig really had to prove to Rain that he was serious and not still a womanizer, which was nice because it showed how hesitant Rain was to putting her heart out there and trusting someone like Craig. I loved how family was important to both Rain and Craig. Rain would do anything for her sister and Craig would do anything for his own sister and mom. Their families played a big part in their lives and their decisions regarding their relationship with each other. I didn't really like Rain's whole plot to redeem her sister because it did seem a bit vague…what was she really planning on doing? I wasn't as connected to Rain as I wanted to be, which prevented me from loving this story like I have all of Samantha's other stories. Overall, this wasn't the best from Samantha. Maybe it was because this was a novella and we didn't get as much time to really connect with the characters, but I wanted more from Rain and more initial development of Rain and Craig's relationship. The moment Craig realized he actually loved Rain seemed to come from nowhere and I didn't really find myself completely invested in their relationship. There were definitely some very hot moments between Rain and Craig, but the connection I expected to have with the main characters just wasn't there.