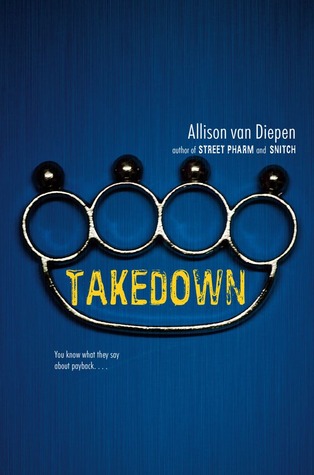 Summary: A teen infiltrates a drug ring to settle a vendetta in this fast-paced novel from the author of Street Pharm and Snitch.
Darren took the fall for Diamond Tony, the notorious head of the city's drug cartel. Two years later, Darren's finally out of juvie and determined to get even.Working as an informant for the police, Darren infiltrates Diamond Tony's operation. But falling for sweet, innocent Jessica was not part of that plan. She's a distraction and a liability. She's also everything Darren dreamed about while he was locked up, and with her, he has the promise of a fresh start.When a deadly turf war breaks out between Diamond Tony and the Bloods, Darren gets caught in the crossfire. The cops think he's playing both sides, and any mistake could be his last. Darren has to stay on his game if he's going to protect Jessica and if he's going to stay alive.


Review: The main reason I read this book was for the romance. Reminding me of the Perfect Chemistry series by Simone Elkeles, I couldn't wait to see the two main characters of this book fall in love when the danger of their lives could threaten to pull them apart.
After spending two years in juvie for taking the fall for Diamond Tony, Darren is out for revenge. Darren has decided to work with the police to bring Diamond Tony down, but if any of Tony's guys find out, Darren's dead. Darren doesn't expect to fall for Jessica, though, and now he has more than himself to lookout for. And when a turf war breaks out, Darren has to hurry up and bring Diamond Tony down before more people get hurt. Based on the summary, it sounded like Darren and Jessica's relationship was a huge part of this book. While I was reading, though, I had the hardest time believing their relationship. Apparently they've always liked each other and just sort of end up together after Darren kissed her at a club to get other guys off her back. I wish there was more build up and more hesitation on Jessica's part, instead of them instantly being together. Then, for the rest of the book, their romance was really overshadowed by Darren's work as an informant and surviving as a drug dealer in a dangerous community. Aside from the romance, Darren's story was enjoyable enough. You never knew if people knew the truth about him and if he was going to be shot down by either his bosses or the guys on the other side of the turf war. His relationship with his little brother was so cute and I loved how adorable Kiki was whenever he was around Darren. The drama behind who Darren's dad really was also added more to Darren's story and why his mother acted the way she did. While the romance was a huge disappointment, I still enjoyed Darren's find to take down the leader behind the town's biggest drug ring. There's a sense of suspense throughout the entire novel and you real never know who to trust. If you want a romance, this is definitely not the book for you. But if you want a book about life on the streets and trying to turn your life around, then you should check out Takedown.