Book Review: Broken Hearts, Fences, and Other Things to Mend by Katie Finn 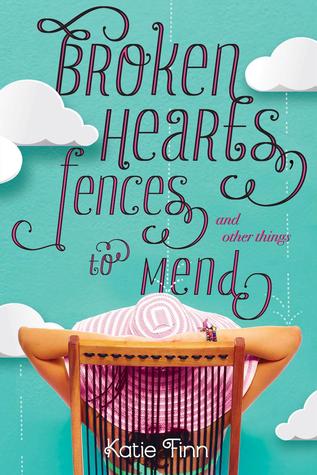 Summary: Summer, boys, and friendships gone sour. This new series has everything that perfect beach reads are made of!
Gemma just got dumped and is devastated. She finds herself back in the Hamptons for the summer—which puts her at risk of bumping into Hallie, her former best friend that she wronged five years earlier. Do people hold grudges that long? When a small case of mistaken identity causes everyone, including Hallie and her dreamy brother Josh, to think she’s someone else, Gemma decides to go along with it.Gemma's plan is working (she's finding it hard to resist Josh), but she's finding herself in embarrassing situations (how could a bathing suit fall apart like that!?). Is it coincidence or is someone trying to expose her true identity? And how will Josh react if he finds out who she is? Katie Finn hits all the right notes in this perfect beginning to a new summer series: A Broken Hearts & Revenge novel.

Review: Oh, YA books how I've missed you! I haven't read a really good YA book in so long, so reading Katie Finn's newest release was refreshing and the perfect way to start off my summer.
Summer has just begun and Gemma couldn't be more excited to spend time with her boyfriend of two years. But when he breaks up with her, Gemma has to find another way to spend her summer while mending her broken heart and is sent to The Hamptons to stay with her dad. Gemma has a bad history of the Hamptons, where she hurt her closest friend when she was 11. But five years have passed and before she knows it, Gemma finds herself pretending to be someone else as she befriends her old friend's brother Josh. Gemma is determined to make amends, but how can they forgive her when they figure out who she really is? Where to start? While this book was very predictable, I absolutely loved it! From page one, so much drama goes on in Gemma's life and you can't help but feel for her. Nobody wants to start out their summer being dumped by their boyfriend. Then, add on the fact that Gemma runs into the family whose lives she had ruined when she was 11, and you have one sticky situation. Gemma truly wants to make things better, especially when she starts to fall for Josh. You know, though, that the summer is a ticking time bomb and everything is going to blow up when Gemma's new friends find out who she really is. The thing I loved most about this book was all of the secrecy, drama, games, and lies. I am a huge fan of Kieran Scotts's He's So/She's So trilogy, and this book definitely reminded me of those books. Teenagers can be cruel and they always make for a fantastic story. Oh my gosh, and Josh was just too cute. He was so sweet and exactly what Gemma needed after her crazy boyfriend broke up with her. It was a little annoying how fake Gemma was at the beginning of the book, but she really grew when she went to the Hamptons for the summer and away from her old life. In the end, I could not put this one down! I didn't know what else would be thrown Gemma's way and what was going to happen when Josh and his sister realized who she really was. And that ending! How could the story just end like that? I know it's supposed to make me want to pick up the second book when it comes out, but it just made me crazy because I can't actually figure out what happens next until it comes out in 2015. But if I can't enjoy more of Gemma until then, you should all pick up this book so you can enjoy the novel just as much as I did. With secrets, revenge, and getting over heartbreak with a super adorable guy, Katie Finn's novel is the perfect summer read.