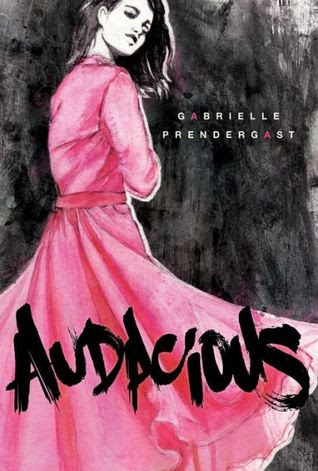 Summary: Sixteen year old Raphaelle is that girl who says the wrong thing, who crosses the wrong person, who has the wrong hair, the wrong body, the wrong attitude, the totally wrong clothes. She can’t do anything right, except draw, but she draws the wrong pictures. When her father moves the family to a small prairie city, Raphaelle wants to leave behind the misfit rebel, the outcast, the vengeful trouble-maker she was. Reborn as “Ella,” she plans fit in at her new school, while her perfect younger sister goes to the Catholic girls’ school and her emotionally fragile mother looks for a job.
But Ella might just be a different kind of misfit. She’s drawn to a brooding boy in her art class, Samir, and expresses her confused feelings in an explicit artwork. When a classmate texts a photo of Ella’s art to a younger friend, the horrendous fallout spreads though Ella’s life like an uncontrollable disease. Ella is expelled from school and faces pornography charges, her mother is hospitalized, her sister fails all her classes, and her distant father finally notices something is wrong.

Review: I've never actually gone out on a mission to read a novel in verse- they just seem to find me. When I read The Language Inside by Holly Thompson, I had no idea it was in verse but ended up loving the story. I'm not at all surprised that the same exact things happened with Audacious...
Raphaelle has never let herself fit into what others want. Instead, she is who she wants to be, especially when it comes to her art. But when it comes time for Raphaelle and her family to move, she reinvents herself as Ella, the girl who isn't going to be the "bad girl" anymore. Knowing Ella, though, she can't ever do the right thing. Ella can't resist Samir, the muslim boy from her art class, and she can't resist testing the limits with her art. She might have taken things too far this time, though, and finds herself having to face a harsh reality in an even harsher world. Boy is Ella (Raphaelle? Not sure what to call her at this point...) audacious. Bold. Daring. She's the kind of person I kind of wish I could be sometimes. She's not afraid to be who she wants and do what she wants, which is really inspiring. She falls in love with a muslim boy? Well, love's love. Sadly, though, the world is such a harsh critic and Ella soon finds it's not always the right thing, or the easy thing, to live the life she's happiest with. Ella goes through so much in this novel that I almost forgot I was reading a novel in verse. There's things about race, religion, disabilities, marriage, eating disorders, and on and on and on. Yet it's told in such a beautiful way. Seriously, if I could write like Gabrielle Prendergast wrote, I'd be writing books left and right. Everything she wrote and how she created her characters were so perfect and I loved every second of the book. All of the characters were all different, yet fit perfectly into the story. You've got Ella's asthmatic sister who always seems to fit in, Samir the boyfriend, Samir's family, Ella's parents, the two girls from school, the art teacher, and so many more that the story gives you glimpses of. You get so much out of this book and I love how it's not all about one single character, but the lives of all of the characters in her world as well. Overall, this book was great. The verse was beautiful and the story was touching. There are serious issues that are dealt with, but there are also some lighter moments of simple teenage life. Ella is a great character who is unique and definitely fun to read about. If you're a fan of verse, and even if you're hesitant to try out that genre, I'd recommend checking out Audacious. And then check out the next book Capricious when it comes out. I know I will!