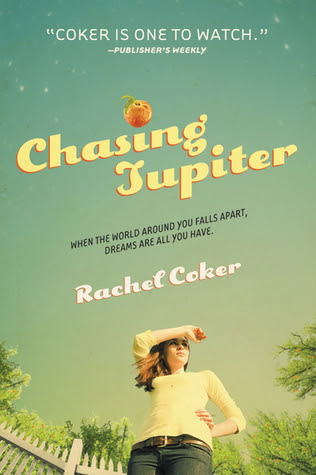 Summary: Scarlett Blaine's life in 1960s Georgia isn't always easy, especially given her parents' financial struggles and the fights surrounding her sister Juli's hippie lifestyle. Then there's her brother, Cliff. While Scarlett loves him more than anything, there's no denying his unique behavior leaves Cliff misunderstood and left out. So when he wishes for a rocket to Jupiter, Scarlett agrees to make it happen, no matter how crazy the idea might be. Raising the rocket money means baking pies, and the farmer's son, Frank, agrees to provide the peaches if Scarlett will help him talk to Juli. The problem is, Scarlett really enjoys her time with Frank, and finds herself wondering if, someday, they could be more than friends. Just as she thinks everything might be going her way, Cliff suffers an accident that not only affects the rocket plans, but shakes Scarlett's view of God. As the summer comes to an end, Scarlett must find a way to regain what she's lost, but also fulfill a promise to launch her brother's dream.

Review: I very rarely read Christian fiction, and I had no idea that this was a Christian fiction novel until I started reading some reviews after I had gotten it in the mail. Nevertheless, I decided to give this one a try and I'm really glad I did!
It's the 1960s and Scarlett has to deal with a lot when it comes to her family; her parents are constantly fighting, her sister is always off with her bad boy boyfriend, her grandpa is crazy, and her little brother is, well, unique. But Scarlett loves each and every one of them. When her brother Cliff decides he wants to be the first person to walk on Jupiter, they make it their plan for the summer to sell peach pies until they can raise the money to build a rocket, enlisting the help of Frank, a guy Scarlett slowly finds herself falling for. But after a horrible accident, Scarlett's world comes crumbling down, putting her love for her family and faith in God to the test. I really love reading books that take place in other times, so it was really cool reading about Georgia in the 1960s. Scarlett was such a sweet character and I loved how she had a passion for baking. Frank was great too with his obsession with helping animals and his desire to help out Cliff and Scarlett. Cliff, though, had to be my favorite character. Yes, he's strange, but that's what makes him so lovable. His infatuation with Spanish and Jupiter are so cute and I couldn't wait to see what crazy idea he would have next. While the beginning of the book was pretty slow, about halfway through things started to pick up a lot. There wasn't a huge emphasis on the religion until near the end, so I was pretty happy about that. I was really able to focus on Scarlett and her family issues rather than how she felt about God. Overall, Chasing Jupiter was a sweet book that was just nice to read. If you're looking for your next favorite read, this probably won't be it. But it's still a really great story that keeps you going along until the end.

Posted by Jessica (Peace Love Books) at 9:07 AM