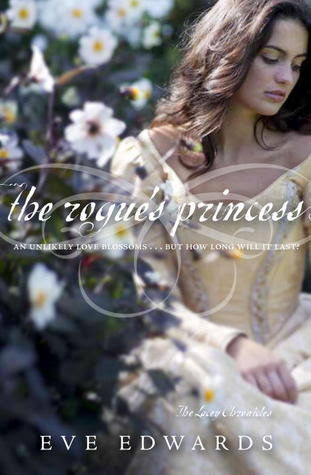 Summary: England, 1586
Mercy Hart, daughter of one of London's wealthiest and most devout cloth merchants, is expected to marry her equal in rank and piety. Certainly not Kit Turner, a lowly actor and playboy, who also happens to be the late Earl of Dorset's illegitimate son. But when a chance encounter throws them together, Kit instantly falls for the beautiful Mercy's charms . . . and Mercy can't deny the passion that Kit stirs within her. She seems ready to defy her father's wishes--ready to renounce her family and her family name for true love. Then Kit finds himself accused treason. Will Mercy have the strength to stand by him? Or will she succumb to pressure and break his heart?
Review: Historical romances are one of my favorite genres, but I never read YA historical romance all that often. So when I saw The Rogue Princess, I was super excited to get into it and see if I would enjoy it as much as I enjoy the adult version of the genre.
Mercy is the sixteen-year-old daughter of a very rich, very religious, cloth merchant. Growing up in such a strict household, Mercy has led a life of respecting God and making it her mission to adhere to her religious laws. Kit, however, is quite the opposite. Kit is an actor, seen as a devilish act in the eyes of the church, who engages in drinking and other "sinful" deeds. But when he first lays eyes on Mercy, he's a goner. Kit tries to turn his life around so that Mercy's father will accept him, but can he sway such a religious man into allowing him to marry the love of his life? I really did enjoy the historical romance aspect of this story, but I just could not connect with Mercy as a character. She seemed very naive and her obsession with pleasing God and avoiding sin just got a tad bit annoying after awhile. Also, I am not a big fan of super long prologues, and the one in this book went on for twenty pages. Now that may not be long to some people, but I just wanted to get to the story already. The other part that bugged me was the insta-love between Mercy and Kit. As soon as their eyes met, they had fallen in love. I wish there was more conversation and courting before they decided that they couldn't live without each other. While those aspects of the book were turnoffs, I really did enjoy the whole context and story of the book. I loved how Kit was an actor and actually acted with William Shakespeare. That part of the plot was really cool and the part about how theater was so looked down upon at that time. Also, I really loved Mercy's grandmother and Aunt. They were great characters, but I don't like it when I start enjoying the parts about the secondary characters far more than the main character. So while the historical part of the book was spot on and fun to read, the romance and main characters just didn't do it for me. I haven't read the first two books in the series, but I'd recommend starting out with those to see if they have more relatable characters and a more realistic romance.

Eve Edwards has a doctorate from Oxford University and thinks researching a large part of the fun for writing historical fiction. She has visited Tudor houses, attended jousts and eaten Elizabethan banquets to get the sights, sounds and tastes right for this book. And, yes, she can testify that it is possible to eat neatly without the modern invention of the fork. She lives in Oxford and is married with three children.

For more information on Eve and her books, check out these links: