I am SO excited to announce that today I have an interview with Syrie and Ryan James to share with you today! They are here to talk about their new young adult novel Forbidden! 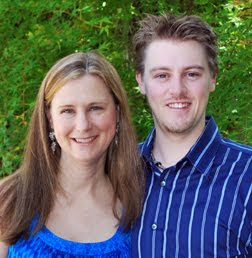 In three words, how would you describe Forbidden?

If you could be anyone from forbidden, who would you be and why?

RJ: Alec, probably, since he has some of the powers I always wished I could have.

SJ: Alec. Totally. He’s a badass action hero with a heart of gold.

How did you come up with the idea of a forbidden love involving angels and the mythical genre?

SJ: Several years back, I had an idea for a book full of suspense, danger, and romance, about a teenage girl who starts getting psychic visions from a mysterious source, who enlists the help of a boy at school to help her figure out who’s sending the messages and why. One day, I was thinking about a screenplay that Ryan and I had written, about a young superhero who was tired of his slayer-like job and dreamt of having a normal life, passing for human. It occurred to me: what if I combined a version of the male character from that story with my psychic girl? Ryan wanted to write the book together. I thought it would be fun to work together again.

RJ: When I was in college I learned about the Nephilim and Grigori, and found them fascinating. So I suggested that we tie together all the supernatural abilities of our characters by involving angels—to have both the girl (Claire's) unusual psychic powers and the boy (Alec's) paranormal abilities come from the same source. We were excited about the idea of creating a whole new mythology with angels that are more like X-men than the traditionally held concept, and the notion that every hero and creature of legend can trace its roots back to angels.

SJ: The main characters’ love being forbidden comes out of the rules of that angel mythology. Claire’s and Alec’s unique natures make their relationship—and Claire’s very existence—absolutely prohibited, and their world becomes increasingly dangerous because of it.

How was working together as mother and son? Was it challenging or easier than expected?

SJ: Writing this novel with Ryan was a wonderful experience. Although the story itself was challenging to create, working together was easier than I expected, and a lot more fun than writing alone. Ryan has a vivid imagination and a great sense of character and story. After creating a detailed storyboard and outline, hashing out characters, plot, and all the details of the world beforehand, we were both totally in sync as we wrote it.

RJ: We often challenged each other to explore new ideas and look at things a different way. I was especially vocal when it came to the paranormal world and the action scenes, whereas Syrie was more adamant about certain things when it came to the romance. Occasionally we disagreed, but we listened and welcomed each other’s input. Looking back, we don’t recall any major disagreements. I more remember how we came to know the characters and the world so well, it was like we were one mind. We often spoke the action and dialog aloud as we were typing, found ourselves finishing each other's sentences, and often cracking each other up.

What do you do when you're not writing?

RJ: I have a day job in the video game industry as the lead editor on Naughty Dog’s upcoming title, The Last of Us. It’s sometimes so all-consuming and exciting that it’s hard to find time to write! But I love working in such a collaborative environment—it’s why I think I especially enjoyed writing the book with my mom.

SJ: I’m always writing. Seriously. Always. The only other things I do are email, exercise, cook, eat, sleep, tweet, facebook, and update my website. Oh, and go to plays and movies. When I turn in a finished manuscript, I celebrate by going shopping.

What's your favorite book and why?

RJ: Hard to pick one, especially as I love both comics and novels, and ultimately I think I love movies more than either.  For now I’ll say the entire Y: The Last Man series is high up on my list.

SJ: Pride and Prejudice and Persuasion by Jane Austen; Jane Eyre by Charlotte Brontë. The characters and stories are timeless and unforgettable, and they have important things to say about people, relationships, the value of self-awareness, and the power of love.

RJ: As above, day job, though I’m writing something else on the side that I can’t talk about yet.  Hopefully there will be a sequel to Forbidden to pull me away from everything else! There’s so much more story to tell, so keep your fingers crossed.

SJ:  I just finished writing THE MISSING MANUSCRIPT OF JANE AUSTEN, a new romantic novel for Berkley, an imprint of Penguin Books, which I’m very excited about! It will be published in January 2013. I have plenty of other historical fiction novels in mind, but I enjoyed writing FORBIDDEN so much, that I also hope to write more Young Adult fiction, either on my own or with Ryan (we’d love to write a sequel to FORBIDDEN).

Thanks so much for hosting us here today. Please visit us at syriejames.com and illusive-entertainment.com, facebook, and twitter!

Summary: She should not exist.

He should not love her.
Claire Brennan has been attending Emerson Academy for two years now (the longest she and her mom have remained anywhere) and she's desperate to stay put for the rest of high school. So there's no way she's going to tell her mom about the psychic visions she's been having or the creepy warnings that she's in danger.
Alec MacKenzie is fed up with his duties to watch and, when necessary, eliminate the descendants of his angelic forefathers. He chose Emerson as the ideal hiding place where he could be normal for once. He hadn't factored Claire into his plans. . . .
Their love is forbidden, going against everything Alec has been taught to believe. But when the reason behind Claire's unusual powers is revealed and the threat to her life becomes clear, how far will Alec go to protect her? ***Check out my review here***

Thank you Syrie and Ryan so much for being here today! If you haven't already, be sure to check out Forbidden!