Book Feature + Giveaway: All the Little Lights by Jamie McGuire 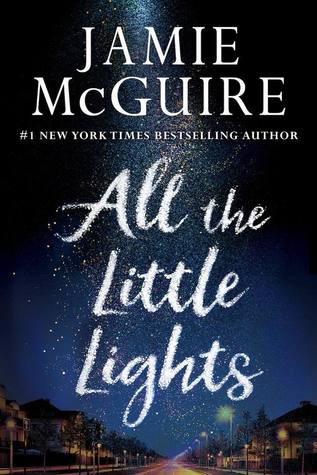 My name is Elliott. You don’t know my story yet, but you will. I spent my summers with my aunt and uncle just down the street from Catherine. She lives in a looming, rickety bed and breakfast called the Juniper, and spends most of her time outside, away from the memories that live between the Juniper’s walls amidst more tangible dangers that I never knew existed until now.

It’s not so much that I fell in love or even that I fought for it, but that a war is waging inside Catherine’s home—one I can’t fight for her. It doesn’t matter how strong I am, or how determined I am to stay. I can only get close enough to observe her pain in detail. And, so I stay, and wait, and help her the only way I know how; to do what I couldn’t for her before.

Elliott began to speak, but a small group of girls approached our table.

“Aw,” Presley said, dramatically touching her chest. “Catherine got herself a boyfriend. I feel so bad that all this time we thought you were lying about him being from out of town.”

Three carbon copies of Presley—Tara and Tatum Martin and Brie Burns—all giggled and tossed their bleached-blonde tresses. Tara and Tatum were identical twins, but they all strived to look like Presley.

“Maybe just outside of town,” Brie said. “Like a reservation, maybe?”

“Oklahoma doesn’t have reservations,” I said, appalled by her stupidity.

I looked away, not wanting to witness their introduction, but Elliott didn’t move or speak, so I turned to see what was holding up their exchange. Elliott offered me a small grin, ignoring Presley’s outstretched hand.

She made a face and crossed her arms. “Is Brie right? Do you live in White Eagle?”

Elliott raised an eyebrow. “That’s the headquarters for the Ponca tribe.”

“So that’s an Indian, right? Isn’t White Eagle for Indians?” she asked.

“Just go away, Presley,” I pleaded, worried she would say something even more offensive.

Excitement sparked in Presley’s eyes. “Wow, Kit-Cat. Are we getting a little big for our britches?”

I looked up at her, anger blazing in my eyes. “It’s Catherine.”

Presley led them to a booth across the room, continuing to tease Elliott and me from afar.

“I’m so sorry,” I whispered. “They’re just doing it because you’re with me.”

“They hate me,” I grumbled.

He turned his spoon upside down and stuck it in his mouth, seeming unaffected. “It’s not hard to see why.”

I wondered what about my outward appearance made it so obvious. Maybe that’s why the town hadn’t stopped blaming Mama and me for my grandparents’ mistakes. Maybe I looked like someone they should hate.

“Why do you look embarrassed?” he asked.

“I guess I was hoping you didn’t know about my family and the smelter.”

“Oh. That. My aunt told me years ago. Is that what you think? That they’re mean to you because of your family history with the town?”

“Catherine.” My name sounded like a soft laugh tumbling from his mouth. “They’re jealous of you.”

I frowned and shook my head. “What could they possibly be jealous of me for? We barely have two pennies to rub together.”

“Have you seen yourself?” he asked.

I blushed and looked down. Only Dad had ever complimented my looks.

“You’re all the things they’re not.”

I crossed my arms on the table and watched the warm hue of the corner streetlight blink between the branches of a tree. It was a strange feeling, wanting to hear more and hoping he’d talk about anything else. “What they said doesn’t bother you?” I asked, surprised.

“I listen to him sometimes, even though he thinks I don’t.”

“What else does he say?” He didn’t hesitate. “That you either get good at rising above and meeting ignorance with education, or you get really good at being bitter.”

I smiled. Elliott spoke his uncle’s words with respect.

“So you just choose not to let what people say get to you?”

“How?” I said, leaning in. I was genuinely curious, hoping he would unveil some magical secret that would end the misery Presley and her friends loved invoking in me.

“Oh, I get angry. It gets old when people feel the need to tell me their great-grandmother was a Cherokee princess, or that stupid joke about if I got my name from the first thing my parents saw after they walked out of a teepee. I can get heated when someone calls me chief, when I see people in headdresses outside of our ceremonies. But my uncle says we should either be compassionate and educate or leave them alone in their ignorance. Besides, there’s too much ignorance in the world to let it all get to me. If I did, all I’d ever feel is anger, and I don’t want to be like my mom.”

“Is that why you were punching our tree?”

He looked down, either unwilling or unable to answer the question.

“A lot bothers me,” I grumbled, sitting back. I glanced at the clones, dressed in cutoff denim shorts and floral blouses, just variations of the same shirt from the same store.

Dad tried to make sure I had the right clothes and the right backpack, but year after year Mama watched as more of my childhood friends faded away. She began to wonder what we’d done wrong, and then I began to wonder, too.

The truth was, I hated Presley for hating me. I didn’t have the heart to tell Mama that I would never fit in. I wasn’t vile enough for those small-town, small-minded girls. It took me a long time to figure out that I didn’t really want to, but at fifteen, I sometimes wondered if it was better than being alone. Dad couldn’t be my best friend forever. I took a bite of my sherbet.

“Stop what?” I asked, the cool orangey-goodness melting on my tongue.

“Looking at them like you wish you were sitting over there. You’re better than that.”

Elliott stood, waiting for me to slide out of the booth. He followed me out, so I wasn’t sure if he noticed Presley and the clones covering their insults and giggles with their hands.

When he stopped next to the trash can behind their booth, I knew he had. “What are you laughing at?” he asked.

I tugged on his T-shirt, begging him with my eyes to keep walking.

Presley rolled her shoulders and lifted her chin, thrilled to be acknowledged. “Just how cute is Kit-Cat with her new boyfriend? It’s precious how you don’t want to hurt her feelings. I mean . . . I have to assume that’s what”—she gestured to us—“this is.”

Elliott walked over to their table, and the girls’ giggles quieted. He knocked on the wood and sighed. “You know why you’ll never outgrow the need to make others feel like shit so you can feel better, Presley?”

She narrowed her eyes at him, watching him like a snake ready to strike.

Elliott continued, “Because it’s a temporary high. It never lasts, and you’ll never stop because it’s the only happiness you’ll ever have in your sad, pathetic life that revolves around manicures and highlighting your hair. Your friends? They don’t like you. No one ever will because you don’t like yourself. So every time you give Catherine a hard time, she’ll know. She’ll know why you’re doing it, just like your friends will know. Just like you’ll know that you’re overcompensating. Every time you throw insults Catherine’s way, it’s that much less of a secret.” He made eye contact with each clone and then Presley. “Have the day you deserve.”

He returned to the door and held it open, gesturing for me to walk through. We navigated the parked cars until we were on the other side of the lot, and headed back toward our neighborhood. The streetlamps were on, the gnats and mosquitoes buzzing beneath the bright bulbs. The quiet made the sounds of our shoes against the pavement more prominent.

“That was,” I began, searching for the right word, “legendary. I could never tell someone off like that.”

“Well, I don’t live here, so that makes it easier. And that wasn’t entirely mine.”

“What do you mean?” “It’s from a scene in Detention Club Musical. Don’t tell me you didn’t watch it when you were little.”

I stared at him in disbelief, and then laughter erupted from my throat. “The movie that came out when we were eight?”

“I watched it every day for like a year and a half.”

“I’m just glad Presley didn’t. That would have made my monologue much less intimidating.”
***

The first time Elliott Youngblood spots Catherine Calhoun, he’s just a boy with a camera, and he’s never seen a sadder and more beautiful sight. Both Elliott and Catherine feel like outcasts, yet they find an easy friendship with each other. But when Catherine needs him most, Elliott is forced to leave town.

Elliott finally returns, but he and Catherine are now different people. He’s a star high school athlete, and she spends all her free time working at her mother’s mysterious bed-and-breakfast. Catherine hasn’t forgiven Elliott for abandoning her, but he’s determined to win back her friendship…and her heart.

Just when Catherine is ready to fully trust Elliott, he becomes the prime suspect in a local tragedy. Despite the town’s growing suspicions, Catherine clings to her love for Elliott. But a devastating secret that Catherine has buried could destroy whatever chance of happiness they have left. 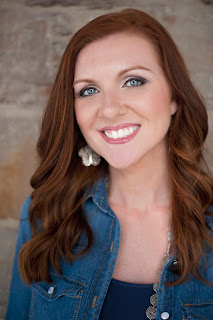 Jamie McGuire is the #1 New York Times, USA Today, and Wall Street Journal bestselling author of Walking Disaster, the Maddox Brothers series, the Providence trilogy, and the international bestseller Beautiful Disaster, which paved the way for the new-adult genre. She was the first independent author in history to strike a print deal with retail giant Walmart, and her work has been translated into fifty languages. She lives in Steamboat Springs, Colorado, with her husband, Jeff, and their three children. To learn more about Jamie, visit www.jamiemcguire.com, or follow her on Twitter @JamieMcGuire.

a Rafflecopter giveaway
Posted by Jessica (Peace Love Books) at 7:00 AM