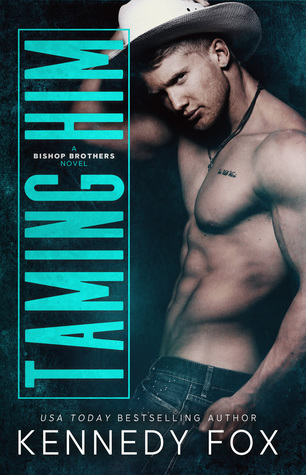 Introducing book 1 in the Bishop Brothers series! A steamy new southern romance series by USA Today Bestselling author duo, Kennedy Fox!
Alex Bishop is your typical cowboy.Charming, sexy, and wears a panty-melting smirk. Working on the ranch helped build his solid eight-pack and smoking body. He's every girl's wet fantasy, and he knows it too. Alex doesn't follow the rules of your typical playboy bachelor. After wining and dining his dates and giving them the best night of their lives, he always sends flowers and calls the next day—even if it's to say, let's just be friends. His mama taught him manners after all, and his Southern blood knows how to be a gentleman. Still, that isn’t enough to tame the wildest of the Bishop brothers. River Lancaster has finally met the man of her dreams. Too bad after six months of romantic bliss, she finds out he's married. With a broken heart and blind rage, she books herself a ticket to Key West, Florida. Tired of cheaters and liars, she’s set on escaping to forget he ever existed. Who needs a man when there's an all-you-can-drink margarita bar, anyway? That's what she tells herself until she bumps into the right guy who can make all those bad memories disappear.Even if it's only temporarily. Two weeks on the beach is what they both need. No strings attached, no expectations, no broken hearts. Too bad the universe has other plans—one that'll change the entire course of their lives in just nine short months.

When I heard about this series coming out, I was so freaking excited to get my hands on it. I mean, you can't go wrong with some yummy cowboys! Alex Bishop lives and breathes the ranch life. He's a real-life cowboy, boots, hat and all. When he has the chance to take a two week trip to a luxurious beach with his best friend, those two cowboys are ready to hit up the sun and sand. The last thing Alex expects to find there is an amazing woman he can't stop thinking about. River Lancaster has dedicated her life to caring for sick children as a PICU nurse and is much need of a vacation with her best friend and her best friend's boyfriend, especially after the breakup she just went through. When she meets Alex, she's shocked how much she likes him. When they put an expiration date on their relationship, they're both dreading the end and don't know how they could ever say goodbye. Going into this book, I definitely didn't expect the timeline we got. The first part of this book takes place when they meet on the beach and their chemistry ignites. The second part of the book is after that when they try at a real relationship in the real world. The beginning was all fun and games while River tries to fight her feelings for Alex because she knows nothing could come out of it. I loved how charming Alex was and how much he really wanted to get to know River more than he has ever wanted to know a woman before. He is definitely the quintessential charming, southern cowboy and I loved him. It was also fun watching him plot with River's best friend to see exactly what she had right in front of her. Moving onto the next part of this book where our characters are back in reality, we see them try at a relationship in the real world. I loved getting to know the Bishop family after that small glimpse in Courtney's book in the Checkmate series. They all have such intriguing personalities and it was fun seeing River fit in so well with their family. There was still so much hesitation on River's part to become a part of Alex's life, but Alex was so swoon-worthy in this book in how much he wanted to show River he was the guy for her. Forget about bad boys; give me a charming cowboy any day!