The Studying Hours (How to Date a Douchebag #1) 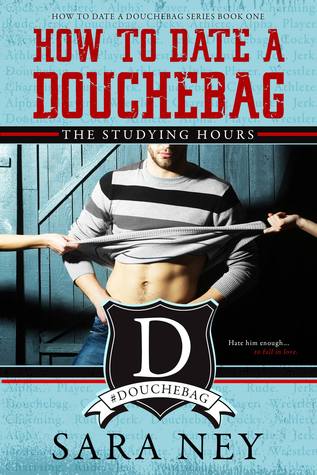 CRUDE. ARROGANT. A**HOLE.No doubt about it, Sebastian ‘Oz’ Osborne is the university’s most celebrated student athlete—and possibly the biggest douchebag. A walking, talking cliché, he has a filthy mouth, a fantastic body, and doesn’t give a sh*t about what you or anyone else thinks. SMART. CLASSY. CONSERVATIVE.Make no mistake, Jameson Clarke may be the university’s most diligent student—but she is no prude. Spending most of her time in the hallowed halls of the library, James is wary of pervs, jocks, and douchebags—and Oz Osborne is all three.She’s smart, sarcastic—and not what he expected.  …EVERY DOUCHBAG HAS HIS WEAKNESS.He wants to be friends.He wants to spend time with her.He wants to drive her crazy.He wants…Her.

I have seen this series all over Instagram, but I really had no idea what it was about. When I saw that the first two ebooks were on sale, I decided to one-click both of them and see how they turned out. Sebastian "Oz" Osbourne is a douchebag. As big man on campus and a Division 1 wrestler, Oz pretty much gets anything, and any girl, he wants. Jameson Clarke doesn't need any distractions. She has to study for her grades and she's serious about college, unlike the annoying jocks who distract her at the library. When Oz won't leave her alone with his arrogant personality and crass language, James tries to ignore him. But Oz is persistent and James finds herself actually enjoying his company while Oz finds himself liking the stuck-up girl from the library. In the beginning, I had a good feeling about this book. I love a cocky, arrogant jock who is intrigued by the girl who isn't impressed by his reputation. Oz is so well known on campus that he's shocked when James has no idea who he is. She is so different from any girl he's been with and he's intrigued by the girl who looks so buttoned up but who has a wild side of her own. I really liked Oz and how he changed throughout the novel and was so surprised by how much he actually like being around James. James, on the other hand, is still a mystery to me. We got that she worked hard and took school seriously, but we never really learned that much about her past. At one point, Oz was talking about what he had learned about James and we were never told those things. I didn't know her past, especially with dating, and I really missed that link to her as a character. I did love how she learned to find Oz's personality endearing and didn't really know what to do about her new feelings. Overall, this was a great college romance with a cocky athlete and a girl that was much more intriguing than she looked. Fans of The Hook Up and The Deal are going to find their next favorite college sports romance with the How to Date a Douchebag series!