Book Review: Because of Low by Abbi Glines

Because of Low (Sea Breeze #2) 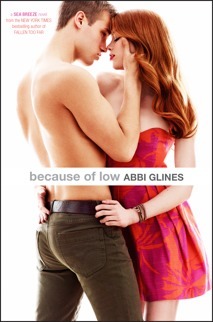 Marcus Hardy had hoped to enjoy a year away at college while he put the summer he’d rather forget behind him. But instead, he’s jerked right back to the coastal town of Sea Breeze, Alabama due to a family crisis. His dear ol' dad found himself a girlfriend only a few years older than Marcus. So now his sister needs help dealing with their mother who is mentally falling apart. The only bright spot to returning is the fascinating red head who sleeps over several times a week. The problem is she's sleeping in bed with his new roommate, Cage Watson. Willow “Low” Foster needs a place to live. Running to Cage’s apartment every time her sister kicks her out isn’t exactly a long term solution. Juggling her courses at the local community college and a part time job doesn’t produce excess income. But Cage has a new roommate and suddenly sleeping over at her best friend’s apartment isn’t such a bad thing. Not when she gets to see those sexy green eyes of Marcus Hardy’s twinkle when he smiles at her like he wants her there. Even though Cage seems a little territorial where Low is concerned, Marcus finds time to spend with Low without upsetting his roommate. Cage may use his small college baseball star persona to sleep with every hot female in his path but he’s still under the disillusion that when he’s through sowing his wild oats, he’s going to marry Low. Marcus intends to change that assumption for both Cage and Low. Until his carefully laid plans come crashing down with a revelation he never expected. He’ll have to choose between Low or his family. Because once the truth comes out.... there’s no other choice.

It was no secret that I was not a fan of the first book in this series. With overdramatic characters and insta-love, it just wasn't for me. While the insta-love was still there in this book, I enjoyed the characters and the troubles they faced with each other and their own families. Marcus Hardy thought he could get over his heartbreaking summer, but thanks to his father, his family is falling apart and he finds himself in his hometown for college. The only upside is that Low Foster is a frequent visiter of his apartment thanks to his new roommate, who happens to claim to be Low's future husband. Low has nowhere to go when her sister decides she can't stay the night, so she relies on her childhood best friend for a place to stay. When she first meets Marcus, she knows she could never be with a guy like him, but the more time they spend around each other, the more she finds herself falling for him. I could not stand the main character in Breathe, so I'm glad to report that I actually enjoyed Low's character. While she was still a bit too naive for my liking, I enjoyed how passionate she was and how much she loved her sister's daughter. I think it was a bit annoying how she felt like she wasn't good enough for Marcus because he was so much preppier than her, but I'm glad she got over that and ignored what everyone else was telling her. What made me enjoy this book more, in the end, was the twist Abbi Glines threw in about Low and Marcus's lives. I wasn't expecting it at all and it really affected their relationship. I've learned from the three books I've read by her that Abbi likes the dramatic, so it does definitely make for some entertaining reading. While this still wasn't the best book I've ever read, I definitely enjoyed it more than the first book in this series. The characters were relatable and the plot had some twists that kept me hooked on the story. I am hoping the series only goes up from here and can't wait to read book three!