Book Review: Until You by Penelope Douglas 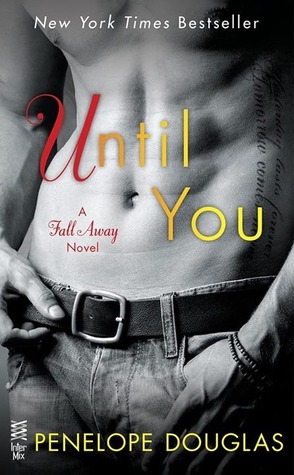 Have you ever been so angry that hitting things felt good? Or so numb that you actually felt high? The past few years have been like that for me. Traveling between fury and indifference with no stops in between.

Some people hate me for it, while others are scared of me. But none of them can hurt me, because I don't care about anything or anyone.

I love her so much that I hate her. We used to be friends, but I found out that I couldn't trust her or anyone else.

So I hurt her. I pushed her away.

But I still need her. The sight of her centers me, and I can pool all of my anger into her. Engaging her, challenging her, bullying her...they are my food, my air, and the last part of me that feels anything human.

But she left. She went to France for a year, and came back a different girl.

Now, when I push, she pushes back.

Before I read Bully, my sister asked me how the heck I could like a romance between a girl and her bully. How could someone ever forgive someone who could bully them so much? After reading Bully, I told her that you just couldn't understand until you met Jared. Reading his side of the story, though, made me fall in love with him even more than in Bully. Ever since his life crumbled apart one summer, Jared has only been able to find solace in bullying the only person he's ever loved: Tate. The only time he feels in control is when he's hurting Tate, but right before their senior year, Tate decides she's not going to put up with Jared's bullying anymore. Jared is shocked by Tate's feistiness and finds himself thinking about her even more than before. But as Tate starts to push Jared buttons right back, Jared finds it harder and harder to keep his facade and hide his true self from the girl next door. Holy moly, Jared. Oh, he is so broken and all I wanted to do was hug him and make him better. He goes through some serious crappy situations and I love that we finally got to see his side of things and what he actually went through. It's always tricky writing a book from anther character's point of view because you risk the chance of being repetitive and boring. For Until You, Penelope Douglas opened up a whole new world into the mind of Jared and showed us so many new things that made us fall for Jared so much more. Like in Bully, we got intense emotion and some serious chemistry in Jared's story. We got to see just how much he was attracted to Tate and how hard he had to hide how he felt just to protect his own emotions and broken heart. There were so many times I just wanted to hug Jared and tell him that everything was going to be okay. And also times where I wanted to shake Jared and tell him to stop being stupid and just be with Tate already! Oh, and seeing how bothered he was by Madoc's actions towards Tate was hilarious and you gotta love a best friend who knows just what you need to get your head out of your behind and go after what you really want. Until You was the perfect addition to the Fall Away series and Jared has easily become my favorite character. His story opened up his character so much to the reader and allowed me to see into his broken past and see how badly he just needed someone to fix him. If you haven't yet, you have to read the emotional and addicting story of Tate and Jared. You're missing out!