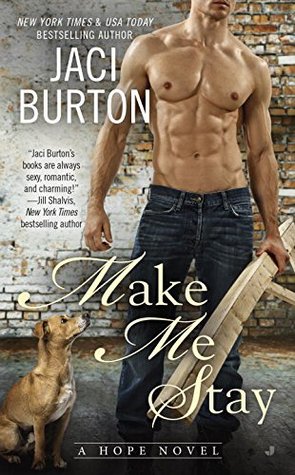 Having left his hometown of Hope years ago, only one thing could persuade architect Reid McCormack to come home for a lengthy stay—the challenge of renovating a historic building. But once the job is finished, he’ll be headed back to Boston, no matter how much he’s drawn to beautiful florist Samantha Reasor.  Samantha watches over her elderly grandmother and pours a piece of herself into every floral creation she designs. Her crush on Reid has been blooming for a while now, but she’s reluctant to act on it. A temporary fling isn’t what she’s looking for, even if Reid is smoking hot and super sexy. She wants a real, permanent, forever kind of love. Two people with different goals couldn’t possibly work, and yet as their attraction grows into something deeper, maybe falling in love is the one thing Samantha and Reid can build a future on.

Jaci Burton's books are absolutely adorable and I always look forward to a new release in her Hope series. We finally got to see more of Reid McCormack in Love After All and I couldn't wait to see his own story in Make Me Stay. Reid McCormack loves his life in Boston where he started his own architecture business and is accustomed to the fast paced life. Now that he's back home in Hope working on restoring a historic building, he's starting to realize what he's missing out on with his family. Sam Reasor has a busy life running her own floral shop and taking care of her grandmother, but she can't ignore the pull she has towards Reid. She knows that he's going back to Boston once his job is done Hope, but that doesn't stop them from connecting. Sam and Reid soon realize that they both have very different priorities for the future, so why doesn't that stop them from feeling things for each other that they've never felt before? I've got to say, the most recent books of Jaci's Hope series have not impressed me. I wasn't a fan of the main character in the last book and this one fell a bit flat for me as well. I liked Sam's character enough, but I felt like there was some drama added in there that was pointless and only added for drama's sake. We all knew that Reid wasn't really going to return to Boston no matter how many times he brought up how he had to go back (which was A LOT), so this book ended up being predictable and I was just waiting for that ending point to come. As for the romance, it was just okay. I'm not sure if I just don't remember the other books in this series as much, but this one felt like it had a lot more sex in it and the emotional side of the relationship didn't balance that out as much as I would have liked. I wasn't that invested in their relationship and found myself skimming more than caring about how the couple was going to end up together. While I loved the beginning of this series, I have been disappointed in the last two books in the small town of Hope. The storylines have been predictable and I haven't been as connected with the main characters. I think I'll stick with this series and see what book 6 has in store when it comes out later this year, but if you're a fan of this series, don't go into Make Me Stay with too high of hopes.