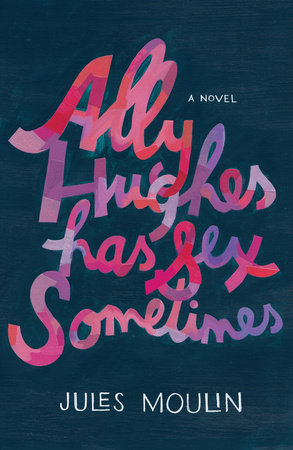 When a buttoned-up professor and her unbuttoned daughter fall for the same irresistible man, a delightful, subversive comedy begins. . . . Life isn’t easy for single mother Ally Hughes. Teaching at Brown, her class load is huge and her boss is a menace. At home, she contends with a critical mother, a falling-down house, and a daughter who never misses a beat. Between taking care of the people she loves, teaching full time, and making ends meet, Ally doesn't have time for a man. She doesn’t date. She’s not into flings. But then she meets Jake, an eager student, young in years but old in soul, who challenges his favorite professor to open up her life, and her heart, to love. It doesn't work. In fact, his urging backfires.Ten years later, Ally's still single. Jake reappears and surprises her in a brand-new role: He's dating Ally's now-grown daughter. In this hilarious, heartrending tale, Ally is finally forced to concede (not only to herself) that an independent, "liberated" woman can still make room in her life for love.

The first thing that struck me about this book was the title. Bold choice, but it had me intrigued. Then, when I read the synopsis and it was about a professor who had a thing with one of her students who ends up dating her daughter ten years down the road, I couldn't wait to see what would happen next. Ally Hughes is a single mother who is a professor at Brown and has spent her life dedicated to raising her daughter. Between taking care of her daughter and working hard to teach some of the most sought after classes at Brown, Ally doesn't have time to date or find herself a man. So when one of her students, a guy named Jake who is young but seems to totally get her, decides to take their relationship outside of class, Ally goes in head first. Well, until reality comes crashing down and Ally sends him away. Ten years later, Jake shows up at Ally's house as her daughter's date and the intensity he brought out in her all of those years ago is back. Can Ally give into those feelings she wouldn't let out ten years ago? The synopsis of this book described this story as "hilarious and heartrending." While I did find this book somewhat entertaining, I wouldn't say it was as hilarious as it had promised. This book is told in alternating chapters between the past and the present, which I enjoyed. We got to see the relationship with its intensity when it was just beginning aligning right along with the intensity that their connection has ten years later. However, the chapters weren't labeled, so I often became really confused as to what point in time the characters were in. I wish we had a little more clarity on the timeline and when things were happening. Also, I think that the relationship with Jake and Ally was more attraction than love, but the author kept on pushing the love aspect. I didn't really feel that depth that was talked about. While I found myself enjoying Ally's journey towards living for herself, I really was not a big fan of her daughter at all. Lizzie was so annoying and I didn't like her part of the story with her pursuing her acting career and wanting to change herself for her career. Her relationship with Jake wasn't even that much of a relationship and I just kept on getting annoyed with her whenever we were following her around in the story. Overall, I just found this book okay. I wasn't wowed and I didn't find it hilarious, but I did enjoy it as I was reading it. I did have a problem with Ally's daughter, which was a pretty important part of the story, so that turned me off a bit. I also wished the love wasn't as forced as the author made it. In the end, I thought I would enjoy this one more than I did.

Posted by Jessica (Peace Love Books) at 8:43 AM