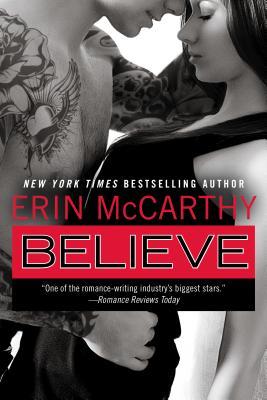 Summary: Robin used to be a party girl…until she got black out drunk and woke up in bed with her best friend’s boyfriend. Disgusted with herself, she doesn’t tell her friends the reason for her sudden sobriety and avoids everyone until she meets Phoenix—quiet, tattooed, and different in every way that’s good and oh, so bad…
Phoenix is two days out of jail when he meets Robin. He knows he has no business talking to her, but he’s drawn to her quiet demeanor, sweet smile, and artistic talent.  She doesn’t care that he’s done time, and she supports his goal to be a tattoo artist.But Phoenix knows Robin has a secret, and that it’s a naïve dream to believe that his own record won’t catch up with them at some point. Though neither is prepared for the explosive result when the past collides with the present…

Review: When I read Shatter, book four of the True Believer, I wasn't a huge fan of the book because of the main character, but as soon as I started this one, I instantly connected with Robin and hardcore swooned over Phoenix.
Robin has always been the fun party girl, but after blacking out one night and waking up with her best friend's boyfriend, Robin is horrified and gives up drinking for good. Robin avoids her friends and just doesn't care about putting on a show for everyone anymore. So when Phoenix shows up fresh out of jail, he's the last kind of person Robin knows she should be hanging out with. But Phoenix is different from his tattooed exterior and has some scars of his own. The two quickly find solace in each other, but Robin can't bring herself to tell Phoenix how she betrayed her best friend. When the past catches up with the both of them, though, they have to learn to trust each other and remember what brought them together in the first place. From the start, you know that Robin is damaged. She wakes up in her best friends's boyfriend's bed and is instantly horrified with what she had done in her drunken state the night before. Robin is determined never to drink again and lose control enough to hurt those she loves the most. So when Phoenix comes into her life, she's definitely in a delicate state, but little does she know that Phoenix is absolutely perfect for her. I LOVED Phoenix and while I think that the reason why he was in jail was definitely predictable (I had just read a book about a guy in prison for almost the same exact crime), it made sense for Phoenix's character. He was just so yummy with all of his tattoos, his ambition to be a tattoo artist, and how much he was learning to enjoy the simple things with Robin. Unlike Shatter, Believe had so much more camaraderie between the group of friends in this series and I loved seeing how close they all were. While Robin was avoiding her friends because of what she did to Kylie, the rest of them were constantly around and worried about the change and withdrawal of Robin. Now I definitely want to read the first two books of this series to see how Robin's awesome and lovable friends all fell in love themselves. No matter what genre she's writing in, Erin McCarthy can do no wrong! She creates addicting romances that are full of emotions, trusting the unknown, and steamy moments that will keep you glued to every page. If you haven't yet, every new adult fan must check out Erin McCarthy's True Believer series!