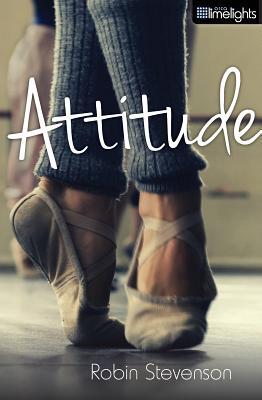 Summary: When Cassie comes to Vancouver from Australia for an intensive summer program at a prestigious ballet school, she finds it hard to fit in. A clique of girls who have been at the school a long time don't want the newcomers to get any attention. At first Cassie tries to go along to get along, but when she realizes that some of the visiting summer students are being bullied and threatened, and that she herself is being sabotaged, she finally speaks out--and finds out how far some girls will go to succeed.

Review: I won a copy of Attitude from Librarything Early Reviewers, and looking at the cover I couldn't wait to read it. I love reading books that involve dancing or the performing arts, so I was really interested to see how this ballet story would turn out. So you could say I was disappointed to find a juvenile story that lacked any real substance.
When Cassie gets into a summer dance program in Vancouver, she couldn't be more excited to take her dancing even more seriously. But Vancouver is a world away from Australia, and once she arrives she finds it hard to fit in. With girls who think they own the world, Cassie doesn't know where she should align herself. So when some of the girls take their bullying too far, Cassie decides to stand up to them, which proves to have many more consequences than she could have ever imagined. Like I said, this was a pretty juvenile story. I think that the characters could have been a bit more mature and not as naive for being 13 or 14 years old. Also, the characters seemed to act in a cliche way. You had the main bully who thought she was the best and her best friend who did anything she said to stay in her good graces. Enter the new girl who doesn't want to take their crap and stands up. Like I said, your typical story. I didn't really care for Cassie because everything about her and her friends kind of seemed forced. And the ending? It ends so suddenly and after only 134 pages. I felt like there should have been some extension to the story so that the ending didn't feel so abrupt. While the story sounded promising, Attitude was not the book for me. The characters were too naive and I didn't get into the story at all. It went by super fast, but the story was left hanging open where a lot more could have been added. If you're looking for a performing arts novel with a great and engaging story, I'd skip over this one.