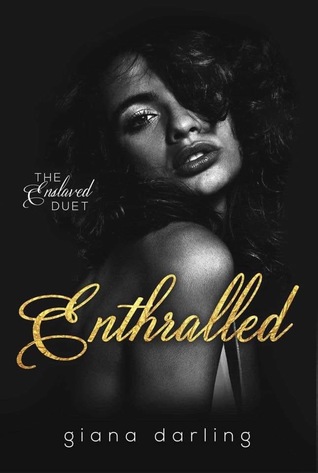 It was the biggest day of my life.
I know most people say that about something joyous; a graduation, a wedding ceremony, the birth of their first child. My situation was a little different.
Sure, it was my eighteenth birthday, but it was also the day that I was sold.
Sold to a man with hair like a crown of gold and eyes blacker than the darkest pits of Hell.
He bought me to own me, to control me, and to use me as a means to an end.
I was his tool and his weapon.
And through it all, somehow, I also became his salvation.

Giana Darling is queen and I absolutely love her Forbidden Men series. I was so excited to see she had a new duet coming out. It was definitely A LOT darker than I expected, but I love a good dark romance when I'm in the mood, so I waited a bit and then dove right in!

When she turns 18, Cosima is sold by her father to a British Lord to serve as a sex slave for the next five years. Cosima is determined not to break, but she's never had to serve Alexander Davenport before...

Going into this one, I quickly realized I was not in the mood for a dark romance, so I put it down for a few weeks and finally picked it back up. This is super dark and definitely not for the faint of heart. Alexander breaks Cosima and she reaches her lowest point. Eventually, though, real feelings do get thrown into the mix and I became super invested in this romance about halfway through this book. I did have a few issues with the pacing in the beginning and in the end, but that whole middle chunk had me glued to my kindle and I couldn't put the book down. Since Cosima is a sex slave, Giana Darling does not shy away from some intense scenes between Cosima and Alexander, but they quickly turn angsty and Cosima finds herself craving the touch of her master...

In the beginning, there were a lot of characters to meet in Cosima's family and the Italian mafia life she's living, so it did take me a bit to catch on. After that, the secrets that came to surface throughout the book kept me on the edge of my seat and I had no idea how Cosima and Alexander were going to deal with what was thrown their way. This book was definitely captured the atmosphere of the extreme elite who think they can do anything with anyone.

Overall, if you want a dark romance about a dark, brooding British Lord and a broken girl who just wants to protect her family, you would love Enthralled. I definitely cannot wait to get my hands on book two! I have to know what happens next!