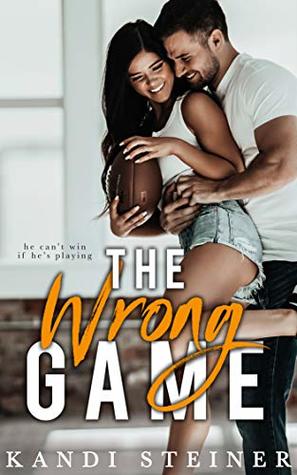 The plan is simple: a brand new, hot, preferably funny, definitely single male will fill one of those seats for every Bears game at Soldier Field. And I’ll fill the other.

I can’t think of a better way to use the season passes I’d bought for my ex-husband. I am a woman of plans, and this one’s foolproof.

Until Zach Bowen offers to be my practice round.

He’s infuriating. Presumptuous and overbearing. And absolutely, undeniably gorgeous. Any woman with a heartbeat would be attracted to him, and mine picks up speed every time he speaks.

But as I said, I’m a woman of plans — and I’m not backing down on this one.

One night. One game. And then, his time’s up.

He can try to change the rules, but here’s the truth: he can’t win if he’s playing the wrong game.

It's no secret that Kandi Steiner is an auto-buy author for me. After reading some heavy emotional books for her past two releases, I was so excited for a fun football romance from her!

When Gemma was betrayed in the worst way possible by a man, she has no idea how she'll ever open her heart again. So with the Chicago Bears season tickets she bought the man who betrayed her, Gemma is determined to meet a new man every week to bring to the game with her. But when Zach Bowen, a hot bartender who overhears her planning with her best friend, offers to be her practice round, he is both infuriating and undeniably charming. Gemma tries to continue with her plan, but Zach won't let her go that easily.

I will say, the prologue of this book hits you in the gut and I was not expecting that. After we get past Gemma's hurt, though, and into her plan to date around during football season, this book turned into the fun contemporary that the synopsis promised it to be. The romance was so adorable and Zach was just so charming. I loved how determined he was to show Gemma she could choose just one guy to be with and that that guys was him. As a football fan, I loved their time at games together and the whole football atmosphere that came alive in this book.

While this romance was fun and cute, I felt like the story did drag a bit around the middle and I wanted something more to grab my attention. Nothing really important or exciting happened during the middle that made me have that obsession with the book that I had at the beginning. It was just a sweet story with two people who had been hurt in the past learning to trust and love again.

If you want a fun contemporary full of football, hotdogs, and romance, The Wrong Game is the book for you. Gemma's character was so relatable and you won't be able to help but swoon over Zach's character. It's safe to say that Kandi Steiner knows how to deliver a good romance and you have to pick up The Wrong Game!