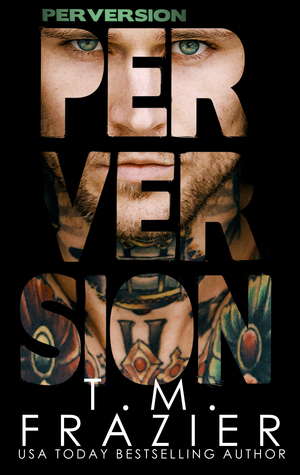 USA Today bestselling author of the King Series, T.M. Frazier, brings you an all-new trilogy with a sexy anti-hero you're going to love to hate, and a ballsy heroine with more up her sleeve than just tricks.

Love is supposed to be a fairy tale.
Ours is a death wish.

I'm the executioner for the Bedlam Brotherhood.
She's a con artist working for my greatest enemy.

I use her.
She manipulates me.

We find ourselves on opposite sides of a bloody war.

My heart and head tell me I have to stay away.
My lust for her doesn't give a sh*t.

Whenever I start a new TM Frazier book, I know that I'm in for a wild ride. Her books are always so dark, so I know if I'm in the mood for something where the characters are a bit on the crazy side, I better pick up one of TM's books.

Grim has only loved one person in his life and he's spent the last five years looking for her. When they finally find their way back to each other, they're on opposite sides of a bloody war that will only end in both of their demises.

Starting out, I wasn't sure how much I was loving the storyline in the past. Some books stay in the past for too long, but I was happy that this book spent just enough time setting up the story when Emma Jean was 12 and Grim was 16 until it jumped five years into the present. I really enjoyed how both characters were developed and how we got to see how their pasts influenced who they became five years later in the story.

When the story flash forwarded five years, I was so immersed in Grim and EJ's story. EJ was trying to survive her new life and Grim was creating a name for himself in his new home. There was definitely A LOT of angst when it came to their relationship, especially because of the forbidden aspect of it. I will say, the characters do experience a lot of dark things, so be prepared for that when you read this. One thing that really bothered me, though, was that one character gets beaten up to the brink of death, and three days later they're up and about as if nothing had happened. I know it's an insignificant detail, but I couldn't help questioning HOW that character was okay when that had happened to them.

When I got to the end, I was definitely shocked with what was revealed and I am already dying to get my hands on book two. I shouldn't be surprised by that cliff-hanger considering it's a TM Frazer book, but definitely be prepared when going into this book! If you want a dark, gritty romance, you should pick up Perversion!